Tattoos cross all cultures, all continents, but there's no mistaking where American tattoos came from. Here's what sets this group apart from the rest.

When it comes to American tattoos, there is one abiding theme: Patriotism. Most Americans have a great deal of pride in their country, and they don't mind showing it off.

Waving in the breeze, or laying flat like an embroidery patch, flag tats are one of the most popular of all American tattoos. They can be used as a single theme or as the backdrop for other American symbols.Flag tats aren't limited to the current version of the flag either. Many Southern-born tattoo aficionados are partial to the Confederate flag; navy blue crossed bars laid with white stars on a red-orange background. New Englanders may prefer the original Betsy Ross flag with a ring of thirteen stars that symbolize the first thirteen colonies.

In lieu of the American flag, some tat lovers will opt to display their pride with their state flag instead. The flag of Texas, the Lone Star State, is a terrific example of this type of body art.

If you're considering getting a flag tat of your own, here are a few tips on proper etiquette.

Members of the armed forces have been tattooed with the symbols of their branch of the service as far back as the Revolutionary War.

Each branch of the military has their own regulations regarding where tattoos can be placed on the body, but the general rule of thumb is that they can't show when in uniform.

The events of September 11, 2001 brought Americans closer together than they had been in years. During the initial months after the tragedy, there was a surge in tattoos memorializing the day and those who lost their lives.Uniquely American tattoos in this group include images of the twin towers, fire fighters, police badges and American flags. On a personal level, some people chose to have lost loved ones memorialized in ink as a sign of remembrance and respect. 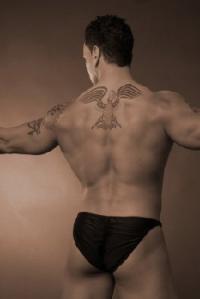 The Bald Eagle is one of the USA's most beloved national symbols, and fine inspiration for thousands of American tattoos.

Eagles are depicted in flight, in head studies and sometimes incorporated with other tattoo designs such as flags and military tattoos.

We've already mentioned the Lone Star of Texas, but other state symbols that make great tats include:

Made in the USA

A "Made in the USA" tattoo sends the message that you were born in the United States and proud of it!

It would be remiss to talk about American tattoos and not mention the symbols of the original Americans.Popular Native American imagery includes:

As you can see, there are many ways to show your love of country through your body art. The only question is, what inspires you?