Angel and devil tattoos can say a lot about what you believe. Although they're usually attributed some religious significance, they're also representative of larger forces at work in our world. What they say depends totally on your choice of design.

About Angel and Devil Tattoos 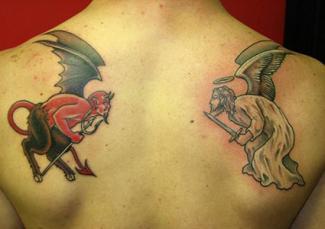 There is no greater example of the Yin and Yang powers of the universe than angels and devils. One group represents the light, the inherent goodness found in humankind as well as nature, while the other side represents the dark and destructive powers of chaos. You'll have to admit the whole thing is awfully dramatic. Perhaps that's the whole point of angel and devil tattoos; you can capture the entire drama of the universe in an inked work of art. The real beauty of it all is that you don't even have to declare which side you're on. When you combine angels and devils in a single tattoo design, you're acknowledging the struggle between these ultimate forces that drive our existence along. You can leave the interpretation right there, or you can take it to the next level and reveal a bit about your personal convictions.

So, if angel and devil tats intrigue you, perhaps you'd like one of these tats yourself? If that's the case, you need to put a great deal of thought into your design because anyone who looks at it is bound to draw their own silent conclusions about the message your tat delivers. And yes, this type of tat does deliver a message whether or not you want it to. 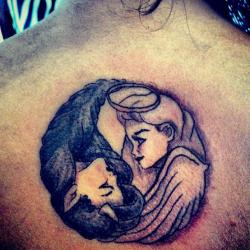 A great way to work angel and devil tattoos into one cohesive design is to take the Yin Yang approach. The Yin Yang is traditionally a circular design that devotes equal halves to the dual nature of the universe.

You can still take a lot of license with the basic spherical design. For example, your angel and devil don't need to be relegated to cut and dry halves. You can go with a slightly swirled teardrop motif, using each figure's head as the drop and their wings as the tails that connect the outer halves of the circle. This design can be fairly innocuous, or you can choose to give a hint about which side you think is winning by giving the lighter or the darker power the upper hand.

You might also choose a "two halves of the same whole" approach. Picture a single head with two distinctly different faces back to back. A wing behind each face fills out the circular design. One side of the head would represent your angel, while the other side symbolizes your devil. A tat like this speaks about the dual nature of good and evil in every one of us. 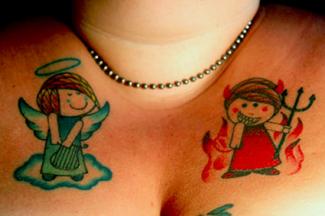 Perhaps you like the entire angels and devils theme, but you're not a hard core believer in either direction. In this case, you can take a lighter approach using cherubs and baby devils. A design of this style is kind of cute and feminine. Maybe they're playmates, or perhaps even siblings? Maybe they're childhood sweethearts about to go their separate ways? Tell your own story with your design. 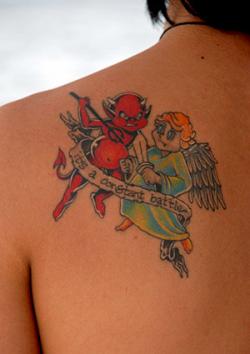 Of course, you can always take the same classic approach that great artists have through the centuries, and depict your angel and devil locked in immortal combat. Many a terrific tattoo has been inked based on this power struggle. Who do you want to win? Who do you think is winning? You can use subtle nuances in your final design to leave clues. Your devil can take the prominent position in the design's composition, or you can firmly give your angel the winning edge by letting him pin the devil to the ground.