If you happen to be an Aquarius and you're looking for something a little different than the average zodiac tattoo, conside an Aquarius tribal tattoo. Combining the two elements in one design can give your body art a unique perspective. 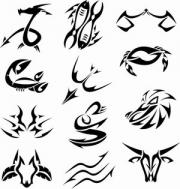 As the 11th sign of the zodiac, there are numerous tattoos and astrological symbols that someone might get to honor Aquarius. There are three main symbols that represent the sign of Aquarius: the Water Bearer, the Glyph (two parallel and wavy lines), and water itself. Each of these images brings in a different side of the sign.

The Glyph is perhaps the most popular tattoo symbol of the sign. The two lines represent not only the flexibility that is present in Aquarius, but water itself. Whether the water is symbolically flowing out of the jug or moving in the ocean, Aquarius is dedicated to evolution. The motion of water is a great symbol for the sign. Combining this with the Aquarian element of Air, water symbolizes the agility in Aquarius. Whether debating or choosing clothes, Aquarius is always witty and quick to the punch.

Tribal tattoos are popular in the world of ink. Tribal tattoos are usually dark in color (and very often just black) and involve abundant line work. Instead of being elaborate and realistic, tribal tattoos are normally ornamental and suggest only the basics of a design. Tribal ink also balances ink with the empty space in a tattoo to create more graphic work. Celtic design tattoos also contain a little tribal flair, although they really are distinct genres in their own right.

Create Your Own Aquarius Tribal Tattoo

If you've been thinking of combining traditional tribal elements with Aquarian influences, there are numerous ideas for Aquarius tribal tattoos that you can adapt. 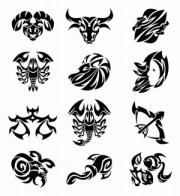 If tribal work is up your alley and you'd like to incorporate Aquarius into the piece, you've got plenty of options. Keep an open mind and create a piece that is true to you above all else. After all, you'll be the one with the ink on your body!