Tats have always been inextricably linked with motorcycle culture, and biker tattoos are some of the most common types of tattoos seen today.

History of Biker Tattoos and Gangs

Biker tattoos were first used by members of various biker gangs and groups, in order to signify membership. The first motorcycle gangs were started in the 1940's and 1950's, and were happy to play up their reputation as outlaws and disruptions to society. They often called themselves 1%ers (one percenters) after a comment made by the American Motorcycle Association (AMA) in the early days of motorcycles. They stated that 99% of motorcycle riders were good, and only "1%" were outlaws. Those in biker gangs said that they were in that 1%.

The Hells Angels are perhaps the most well known motorcycle gang - from earlier times right up to today. Started in San Bernardino, California in 1948, this biker group now has members and chapters all over the world. There are even chapters of the group as far away as Australia. While this biker gang does consider itself to be 1%ers, the Hells Angels do support various charities and do volunteer work as well - which is not to say that all the members are free of criminal pasts or activities.

Another famous motorcycle club (biker gang) that is still popular today is the Pagans MC. This club was started in 1959 in Maryland, and the members of this group started out wearing denim jackets and riding Triumph motorcycles. Not originally started as a 1% club, the Pagans eventually morphed into a biker gang by the late 1960's. The patch of the Pagans includes the name of the group, in red, white and blue, as well as an image of the Norse fire-giant Surt. 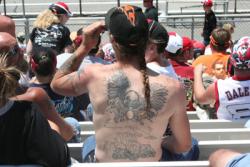 While there are many different types of biker tattoos, some of the most popular have to do with the Harley-Davidson logo. This American made style of motorcycle is probably the most popular bike in the US (if not in the world) and those who ride love to show their brand preference by getting tattoos of the Harley logo. Variations include logos with images of bikes, roses, American flags, and pin-up girls. The Harley logo may be seen in the company's trademark colors, orange and black - or they may be done in just black for a more dramatic look. Still others prefer to just have the name Harley-Davidson inked on their bodies, in styles ranging from script to Old English.

Other Images Associated with Motorcycles 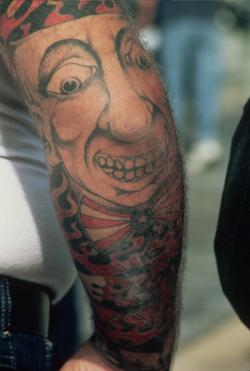 Of course, there are other images that are found on many tattoos that are seen as related to bikers and their lifestyles. Pin-up girls, nude or scantily clothed, are seen frequently on the biceps of bikers, as are skulls and snakes. Spiders, scorpions and other venomous and dangerous animals are also favored by bikers. Daggers and knives can be used in these designs as well.For women, biker tattoos can include the standard skulls and daggers, but they also might include roses (complete with thorns dripping blood), hearts or even butterflies. Since many of the first women to get tattoos were so-called "biker chicks", many of the images we see today that are classified as female originated with bikers. For more ideas, Tattoo Now offers many different pics of tattoos that are actually on the skin of bikers.