The Claddagh (usually seen in ring form) is a Celtic design that is composed of three images. The center is a heart, around which two hands are clasped, and a crown sits on top of the heart. The three images each have their own meaning - the heart means love, the hands symbolize friendship and the crown is added for loyalty. A saying or expression often goes along with this imagery, stating "With these hands I give you my heart and I crown it with my love." Claddagh rings are often worn as symbols of love - some give these Irish rings as engagement rings, while others choose to wear the jewelry as wedding bands. It is said that if you wear a Claddagh ring on your right hand, there can be two meanings to the ring, depending on how it is worn. A ring on the right hand facing inward means your heart is taken, while one pointed outward means you are not in a serious relationship.

There are similar meanings for Claddagh rings worn on the left hand. If the ring is pointed inward, it means you are married. Pointed out usually is taken to mean that you are engaged.

Claddagh images can also be found in other places, such as on different pieces of jewelry or in Claddagh tattoos.

There are several different legends regarding the origin of the Claddagh, but the most common is that a man of the Joyce clan, from Galway in Ireland, was captured while at sea and sold as a slave to a goldsmith in Algiers. He was trained to work with gold, and did a good job until King William III took the throne and required the Moors to release all British slaves. Joyce's slavemaster was so happy and pleased with his work that he offered him half of his fortune as well as the hand of his daughter if he chose to stay. Joyce said no, and continued home to give his true love the Claddagh ring that he had designed and forged while he was a slave. This is said to have taken place in 1689, with some versions of the story stating that Joyce sent the ring back to his love before he was released, asking her to wait for him.

The Claddagh spread to other parts of the world after the potato famine in the 1800s forced many Irish to leave their country. At that time, Claddaghs (especially Claddagh rings) were family heirlooms passed down from mother to daughter. When others saw the beauty of these wedding rings, they began to use the design for their jewelry as well. 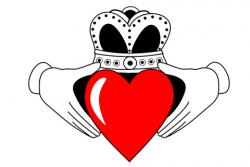 The symbolism of the Claddagh has led many to choose to get Claddagh tattoos. This image, which can be a symbol of love or even just friendship and loyalty, is often seen in matching pairs on couples who want to show their love for each other. Claddagh tats can be placed anywhere on the body, and can be seen in a number of styles and even, occasionally, colors.

If you want to have a truly unique Claddagh design, using this image as wedding ring tattoos can be a great way to show off your love while also following the recent trend of tattoos instead of wedding jewelry. Another way to make your Claddagh tat unique is to add different elements to the tattoo. Using Celtic knots, Celtic crosses and other Irish-inspired imagery can make your Claddagh different from the rest. Tribal designs can also be added to a Claddagh, which can make the tattoo more contemporary.