One of the most recognizable faces in Hollywood, Danny Trejo tattoo work has been featured in countless films and magazines.

The first thing most people notice on Danny Trejo is the giant tattoo on his chest and the others all over his body. He has earned the nickname of "The Illustrated Man" and is a legitimate tough guy after having spent most of the 60's in some of the toughest prisons in the California correctional system. Cursed with a horrendous childhood in one of the toughest areas in Los Angeles, there wasn't many options for the young Latino. In the end he chose to become a criminal and has admitted his faults, after serving his time has become a drug counselor.

While in the correctional system, Trejo learned how to box and even won titles while in San Quentin. While at a Cocaine Anonymous meeting he was seen by a director who later called him for support services. When Danny Trejo arrived it turned out to be the set for Runaway Train. Due to his tough appearance he was offered a job as an extra then later a jot as boxing coach. He was such a natural at that he became the featured opponent against Eric Roberts in the film. This was the beginning for Danny Trejo and you may have seen him in some notable films like:

Having worked in Hollywood since the mid-80's he has worked on at least 5 films a year, every year and has no signs of stopping and has 6 films in post-production in 2009 alone! As long as there are bad guys to be played, Danny Trejo will certainly get to play some of them. It is this work schedule that has made him arguably one of the most prolific actors in movies today. 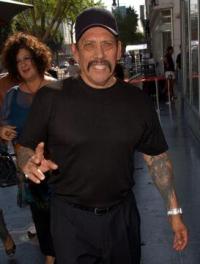 The artistry behind the Danny Trejo tattoo ink is steeped in strong meaning and emotional ties to the character actor. Many of the tattoos you see on his body were put there while in prison and are vastly gang affiliated but the most prominent one is located on his chest.

The Chest Tattoo: Placed directly over the heart and taking up the majority of his torso, his chest tattoo is seen in many of the films Danny Trejo has worked on. It features a woman wearing a sombrero. A bright red heart near the base and wrapped in wire is a fairly new addition and is meant to signify "forever" to the actor in regards to his marriage to his wife Debbie.

A couple facts about this ink:

Totem Animals: Those who get tattoos also have a frequency to get an animal inked on them. Danny Trejo is no different as he has a large peacock tattooed on his left forearm. The peacock as a totem animal is often a symbol of purity of heart and fidelity. On his right arm is a tattoo of the hummingbird.

The hummingbird symbolizes a few things to different cultures:

Rose Tattoo: Also present on Danny's right arm is a tattoo of a rose bush. Roses can mean many things to different people, including a memorial of some kind. The most common reason for a rose tattoo is for it to signify beauty, but the thorns add a different twist. Roses mean love to a lot of people and adding thorns usually signify that love does not come without sacrifice.

Catholic Cross: Located on the left bicep of his arm is a Catholic cross to represent his personal faith.