El Dia de los Muertos, Day of the Dead, fuses ancient and contemporary beliefs in a celebration of the deceased by the living. Day of the Dead tattoos are often commemorative, and typically conspicuous, with skulls as a central theme. 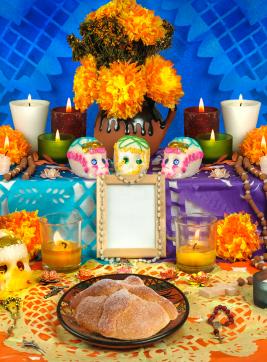 The Day of the Dead evolved from Aztec rituals that honored departed loved ones, rulers and warriors. When the Spanish arrived in the New World, they co-opted indigenous beliefs by merging them with Catholic religious practices. November 2nd, an auspicious point in the annual agricultural cycle, is All Souls Day in the church and coincides with a Mexican and Central American tradition of making offerings to honor the dead. The 17th-century Europeans brought sugar skulls and special Masses to a population that already dedicated altars with ritual offerings - and festivals of dancing, singing and pageantry - to the memory of their ancestors.

Today, Dia de los Muertos is a festival that begins at midnight on All Hallow's Eve - October 31 - and continues to November 2nd, All Souls Day. Day of the Dead tattoos incorporate in permanent ink all the multicultural ritual elements, in striking images that memorialize loved ones or the belief in life after death. 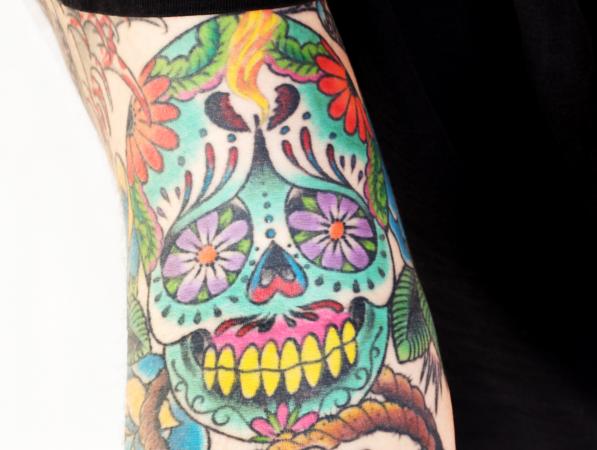 A calavera tattoo is a skull image, by far the most common Dia de los Muertos tattoo. These range from the colorful candied skulls to the rather goth cadaverous all-black, and vary in significance. The skull is almost always a woman, a tradition that stems from the original rituals that centered on a Mexican goddess and Spanish saints. That imagery morphed into Catrina, a 20th-century satirical sketch of an unpopular politician's wife, as the Dia de los Muertos skull figure. Today "Catrina" is shorthand for the female depicted in the candied calaveras and inked versions.

Candied skulls are very colorful, often cheery depictions of the sugar skulls typical of the holiday. These are area-specific tattoos: a single shoulder or bicep, an ankle or the top of a foot, or an inner arm. The most intricate might be surrounded by swirling flowers, lines, hearts or vines -- but candy calaveras are designs, not memorials. An image of a candied skull is decorated spun sugar - not photo-realistic. It can feature heart-shaped eye sockets, fluttering butterfly noses or eyebrows, lacy overlays and swirly lines. Add an inspiration word like "Hope" or "Forever" to express a thought about the fragility of human existence. 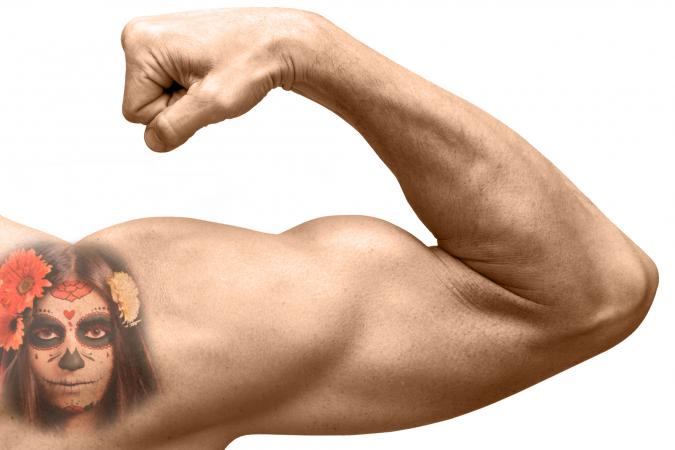 Portrait skulls capture the face of a departed friend, celebrity or loved one with the attributes of a sugar skull enhancing the photo-realism. The portraits are as lifelike as the honored person, wearing the iconic make-up used for Day of the Dead costumes and parades. They are showy memorial tattoos, taking up an entire shoulder, running from the neck down one arm to the wrist, occupying the whole back, or winding up and around a calf. The artist begins with a photograph of the deceased person, transferring the image to the skin and then embellishing it with the attributes of the calavera. It takes real skill to reproduce an accurate portrait, so expect this commemoration to require time and serious coin.

A portrait artist will often add deep dark circles around the eyes to indicate eye sockets and may replace the actual nose with an elongated dark triangle, like a nasal cavity. The portrait, however, clearly remains a picture of the dead woman, made up to look like a Day of the Dead celebrant. In some cases, this approach may be used for a departed child or pet. Very rarely is it used for a male image. A banner beneath the portrait might contain the first name of the pictured person. 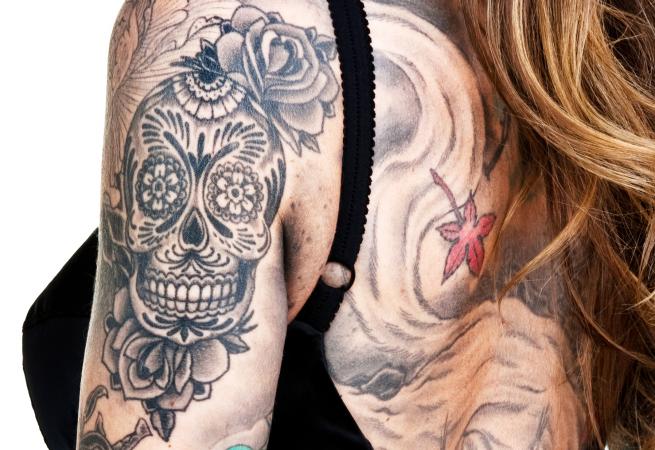 Bleak black drawings are stark reminders of mortality that may honor a particular person but usually make a statement about the inevitability of death. These inked images are either simple outlines or elaborately shaded and include both typical decorations, such as flowers, and more symbolic additions, such as owls, clocks or weapons.

Celebrity Day of the Dead tattoos are often created in shades of black and gray - a recognizable image wearing sugar skull make-up - and may include the death date of the favorite famous person. Treat these like any portrait tat and give them prominent placement on a chest, back or shoulder. A stylized sugar-skull template - just the skull outline filled with artistic doodles around eye, nose and teeth shapes - is an all-black tattoo that relies on its design for impact. This one tucks in anywhere and may even be coordinated with a classic tribal tattoo.

One variation of the all-black or mostly black tat is a skeleton figure with a skull head and a few symbolic accessories in colors - a big sombrero, striped poncho, guitar or bottle of local brew. Skeleton figures are simultaneous nods to ethnic heritage and a hedonistic vision of post-mortality partying. The tiniest all-black tats fit on a finger or behind the ear.

Meaningful ornamentation that individualizes a Day of the Dead tattoo has roots in traditional celebrations.

Choose the colors for your tat based on tradition. Use just one or two colors to highlight a detail of a black tat. Fill in a sugar skull with a riot of significant shades.

Just as the Day of the Dead festivities - observed in Mexico and in parts of the U.S. with vibrant Mexican-American communities - transcend borders, the striking tattoos have been widely embraced for their artistry and meaning. Choose a sugar skull to celebrate Mexican culture. Create a Day of the Dead portrait to ink the memory of a loved one on your skin. The distinctive images serve as reminders of the fragile boundaries between life and death and the human impulse to ritualize and revel in both loves and losses.