There's a tremendous assortment of demon tattoos decorating the tattoo-populace today. Rich in symbolism while occurring in cultural and religious beliefs across the world, demons are identified by practically everyone as supernatural beings. They're often recognized as creatures of influence, desire and evil. However, in some traditions, demons are considered good-natured. Emerging from global literature, folklore, mythology and the fine arts for an incalculable period of history, demonology carries some considerable weight indeed. It's not surprising that demon tattoos are a popular choice amongst today's ink enthusiasts.

Japanese culture, Christianity, Greek tradition, Islam, Judaism, Native American folklore, and so many more have developed beliefs and opinions on demon participation in mankind's existence. Listed below are a few prominent creatures represented in demon tattoos.

Irezumi, the Japanese art of tattooing, dates back thousands of years. This form of tattoo artistry developed out of an ancient printing method. Woodblock printing artists began chiseling, gouging and penetrating human skin with the same artistic quality they'd applied in their illustrations for epic Japanese literature. Over time, the tattoo culture of Japan was established, although the original wearers of this fine art remain debatable. Some speculate that Irezumi was attributed to lower class citizens who used it as a symbol of bravery, courage and respect. Others believe the wealthy upper class citizens underwent this art of chiseling ink beneath the skin to display their affluence and status.

Many demons are still replicated in today's version of Irezumi:

Demon skulls are usually depicted with bewildered or angry facial expressions. The bone structure of the skull is manipulated in such a way that a demon skull appears as though its eyebrow bones are furrowed while it forms a bony grin. Serpent tongues and horns are frequently included in this tattoo imagery, embellishing its sinister nature.

Gargoyles, although historically used as statues that spurt water from their mouths, have been depicted in their monster form for many demon tattoos. Despite their frightful exteriors, gargoyles have long been viewed as protectors that ward off evil with their grotesque appearance.

The female demon is usually attributed with sexual and roguish tendencies. These vixens are depicted in various ways. Some are simple silhouettes of nude buxom females with horns, wings, a tail and a pitchfork. Other images involve exquisitely detailed features creating a seductive female imp for the skin. Gothic fairies are also a popular choice. 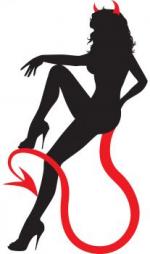 Satanic portraits are a popular demon tattoo choice. These images are usually meant to be fearsome. They tend to possess hideous faces, massive muscular bodies, curved demonic horns and fire imagery in the background. Sometimes they are portrayed as goat demons, viewed as "unclean spirits" that are commonly involved with foul, evil acts.

Demon tattoos aren't limited to the categories listed above. There are innumerable possibilities when creating a demon tat. Sometimes demons appear as though they are tearing or clawing through the wearer's flesh and skin. Additionally, you may find you'd like to apply only specific parts of the demon in your design. Demon wings are a popular pick,consider placing the images on your shoulder blades or your entire back. Thanks to the diverse mutable nature of demon imagery, you have the potential to design an original demon tattoo unlike anyone else.