Why spend a fortune on being in hours of pain, when you could get a dragon henna tattoo instead? The henna paste is placed directly on the skin either freehand or by using a stencil. Unlike other temporary tattoos that fade away or rub off in a few hours, henna can land up to three weeks.

When getting your henna tattoo, there are several different types of dragons available. There are stencils that artists use or they can apply the pattern freehand. Henna doesn't use colored dyes, so your piece will be solid. Although you can get detailed with henna, many people prefer something that more resembles a tribal tattoo:

Dragons are known all around the world and have long since been the basis of many tattoos that range from classical dragons to the Oriental dragon. You may be wondering what the differences are and if these dragons have any special meanings that you should be aware of:

Dragons are huge mythical creatures that hold several meanings, depending on what part of the world you are from. These dragons are used as subjects of tattoos because of either a deep meaning to the wearer or just because they look cool. Getting a dragon henna tattoo will allow you to get something cool without the pain. 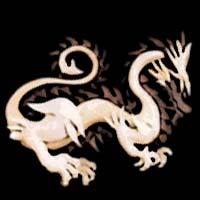 These dragons are from the continent of Asia. Depending on the country, the dragons differ. The Chinese believe that all dragons come from China (the Japanese believe all dragons come from Japan). The toes all differ, depending on which direction the dragons are flying. Chinese dragons have 5 toes but as they fly south, they begin to lose toes so by the time they reach Japan they have only 3 toes. In Japan, they believe the same thing but going in reverse. The Japanese also believe that the breath of a dragon creates clouds that produce rain. What is standard among the eastern dragon is that none of them have wings and they are long and coiled and swim through the clouds much like a snake moves in water.

The culture views the dragon as a wise and noble creature. They bring good fortune and luck but the reverse is also plausible. The yang (negative) essence of the dragon can be attributed to bad luck, fear and destruction that represent the dragons' furious side. 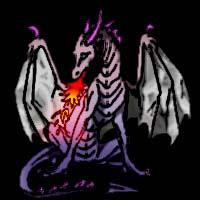 Dragons in the western part of the world are of the medieval type and are ferocious and dinosaur-like in appearance. They have large teeth, big wings and eat Knights for breakfast. From scaly skin to breathing fire, the western dragon is more or less a mindless monster. These types of dragons are also thought of as holding large sums of gold and other treasures captive. These dragons are very suited for fantasy art and gamers of all sorts and don't hold the same cultural significance, outside of folklore, as the eastern dragon does.

The Christian church actually condemned the dragon as a serpent deity and as a symbol of the Pagan religion. Many works of art from that era which feature dragons are often being killed by the holy figures of Christianity. The Welsh and the Scots view the dragon as a creature of power and respect, and the majestic creature often finds its way on many family crests.