Of all the Native American tattoos around, few are as popular as dreamcatcher tattoos. Dreamcatchers are rich with symbolism and history, and many people want this symbolism on their bodies. Should you get one of these historic tattoos?

What Is a Dreamcatcher? 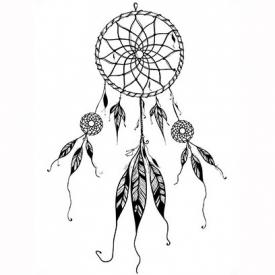 Consisting of a loop and a woven net, a dreamcatcher resembles a spider web. Strips of leather holding beads, feathers, crystals, stones, and other items hang from the loop.

Though many people today use dreamcatchers as decorations, dreamcatchers are actually full of meaning and symbolism. Dreamcatchers were first created by the Ojibwa Nation, also known as the Chippewa or Anishinabe, and used to ward off bad dreams. Once upon a time, the Ojibwa believed that Spider Woman visited newborn babies and spun a protective web around the cradle, ensuring the infant had only sweet dreams. After the tribe became more nomadic, they feared the Spider Woman might not be able to find the babies. They, of course, needed a substitute method of wiping out nightmares. Dreamscatchers were soon created. Unlike the modern, decorative versions, the original amulets were small and unadorned.

The Ojibwa believed that the web caught bad dreams, much as a spider's web captures prey, protecting vulnerable children as they slept. The popularity of the protective charms soon spread to other Native American tribes, although some shunned dreamcatchers.

Due to their mystical history, dreamcatchers have become a fixture of the New Age movement in recent years, and dreamcatcher tattoos have also grown in popularity. Some people use these tats to pay homage to the original occupants of our country. Others see them as trendy artwork. Still others get these symbolic tats out of a superstitious belief that the catchers will protect them. Even Hollywood has gotten in the act - actress Vaness Ferlito has a dreamcatcher on her shoulder. 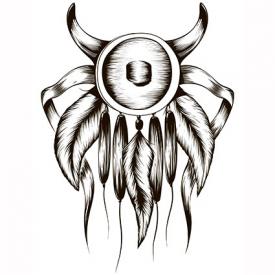 So you've decided to get your tat, but now you have to think - where should you put it? Dreamcatchers are a popular choice for arm tattoos for men. For women, they can be an ideal pick for a small shoulder design. For a bolder look, use the dreamcatcher as part of a large Native American motif on your entire back. Complete the look with wolves, buffalo, arrowheads, and feathers.Although dreamcatchers have a fairly uniform appearance, there is much room for customization. For example, you can frame your dreamcatcher with vines, flowers, or insects. You can also add different colors to the designs to express your own unique tastes. Colored "beads" are a subtle way to put your own spin on the design. Additionally, you can also have the tattoo artist create a distinctive design within the web itself. Still another great way to personalize your catcher is to use a design in the center of the loop in place of the web. Some ideas include: 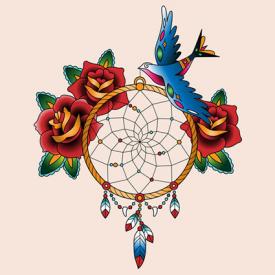 A Word About Cultural Sensitivity

Although dreamcatcher tats are popular, they are not without controversy. Native Americans, as a whole, are protective of their traditions, history, and culture. Their symbols and beliefs are special to this culture; for example, many consider feathers to be sacred. Mainstream American's "Indian" items, such as feathered headgear, tomahawks, and moccasins are seen as a cultural affront by many in the Native American community, and so it is with dreamcatchers. Tattooing your body with a sacred symbol of a group in which you are not a part can be seen as disrespectful and inappropriate. Before you take the leap and ink this powerful design on your body, take the time to consider the full meaning.