The topic of female chastity piercing is often misunderstood. Learn a few of the facts about this piercing ritual.

The practice of piercing for the preservation of a woman's sexual purity is often believed to date back hundreds, if not thousands, of years. However, that assumption would be wrong. In fact, piercing the genitalia at all is a very modern practice that gained a true foothold in society around the 1980s, although there are reported cases in previous centuries.

For some reason, many people seem to equate this piercing with another historical practice meant to prohibit promiscuity in women, the clitorectomy. This procedure involves the complete removal of the clitoris, thereby preventing sexual stimulation and theorectially lessening the desire to have intercourse outside of marriage. Although this practice is considered a tradition in some cultures, it is believed barbaric in others. This mainly stems from the fact that the operation is typically performed outside of a hospital setting, usually by another female in the family, and no pain killing drugs or anesthesia are offered to the young women undergoing the ritual.

In comparison, a chastity piercing is a minor procedure that doesn't result in any permanent mutilation of a woman's genitals, provided that the procedure is carried out competently. Additionally, the decision to have the piercing is generally the woman's own, and it is not enforced upon her.

When examined closely, a chastity piercing really isn't that different from many of the genital piercings women opt for. Typically, the piercing passes through the outer and/or inner labias and is inserted with either a barbell or a captive bead ring. This effectively closes a portion of the vaginal opening to prevent penetration, still leaving the area open for other bodily functions.

For the most part, a female chastity piercing is largely symbolic because the jewelry is easily removed. However, some more imaginative pieces do come with a functioning lock that requires a key to open.

Reasons for having a chastity-style piercing vary. 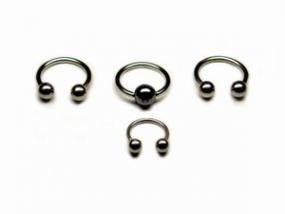 As evidenced by the popularity of chastity rings, many young women are taking a vow of sexual abstinence, at least until they are married. A chastity piercing is simply another testament to this vow, albeit a more drastic one than slipping a ring on your finger. However, such a piercing does bring certain questions to mind. Presumably, no one would ever get to see the piercing except its owner and the piercer who created it, at least until the wedding night. Is it really worth going through the procedure to create a personal reminder of the vow? For some people, the answer is yes.

In other cases, a chastity piercing becomes a symbol of fidelity between partners, and the jewelry is only removed in anticipation of intercourse within the confines of the relationship.

There is another school of thought on chastity piercing that doesn't involve abstinence. Practitioners of bondage and/or sadomasochism can use a female chastity piercing to symbolize power over and "ownership" of a woman's genitalia.

Caring for This Piercing

As with any piercing, genital or otherwise, it's important to keep the area clean during the healing period. Wash it once, but no more than twice, a day, and allow time for air flow to promote healing. Never touch the jewelry before washing your hands, and resist the urge to adjust the jewelry or you might cause it to migrate. Wear clean clothing each day, and change the bed sheets once a week to lessen germ exposure. Following these procedures will help keep the piercing infection free not only during the healing period, but for as long as you choose to keep the piercing.