Fire has more meanings than any other tattoo symbol - from death to rebirth to giver of life and warmth, so it is only natural that flame tattoos can mean all of these sentiments and more.

Flame tattoos have been around for many years, but really started to gain popularity in the last half of the 20th century. Fire, however, dates back to the beginning of civilization, and marked a turning point in human evolution.

Once fire was "discovered" and harnessed, people (at that time, Neanderthals or cavemen) could enjoy the civility of a warm place to stay and cooked food. Fire lit caves and huts, and provided a way to keep the cold at bay. Some of the earliest cave paintings found, from tens of thousands of years ago, included pictures of fire. It's only natural that people will still honor this life-giving force by having pictures of it inked on their bodies. 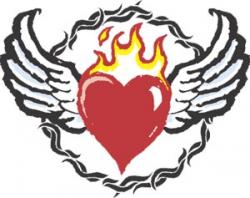 Of course, flame tattoos don't only have to do with fire itself. Some choose to get this particular tat in order to show off how "hot" they are, or to accentuate their sex appeal. Both women and men get flame tats, and in a number of different places. These fiery images can be placed to show off a well muscled arm, or on the chest or backside of a voluptuous woman. Some people choose to couple the flames with another image, such as a heart tattoo, to show that they are a hot lover or that their heart is aflame. Sometimes, the burning heart can be a religious symbol - as in the case of sacred heart tattoos.

Rebirth From the Flames

Other people get fire or flame tats to show that they've been through a harrowing experience and come out okay on the other side. In this case, it can be said that the flames represent a type of trial by fire or walking through fire, and making it through worst of it. Some choose to get a phoenix tattooed rising from the flames, a dual symbol of rebirth. 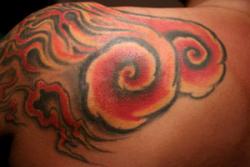 Tribal and Other Flame Styles

There are many ways to depict flame and fire, but most tattoos you see will be done in one of two styles: old-school (similar to the Sailor Jerry style of tattooing) or tribal. Tribal flames can be done in solid black, or just feature an outline. Most times, this type of flame tat will not be colored in any way.Old-school flame tattoos tend to be more colorful, incorporating reds, oranges and yellows into the tat in order to simulate real fire. These bold tattoos are seen as stand-alone pieces, or flames are added as an accent for everything from swords and guns, to crosses and eyeballs. Fire is sometimes so overdone in tattoos that it can be a bit ridiculous, remember - a little flame goes a long way.

Many bikers and motorheads choose to get flame tattoos as well. Flames are a common decal on many fast cars and motorcycles (carefully applied or painted in order to show off the vehicle's best assets), and choosing to accent your body with these same images can show devotion to your hobby. Many Harley Davidson owners get flames tattooed on their selves, so common is this adornment for their hogs.