Gang tattoos are still an underground practice and many tattoo artists won't do them. Even finding pictures of them on the web is a challenge.

Gang tattoos mark a person as part of a street gang or a prison gang; they symbolize membership and represent the wearer's beliefs. Sometimes they also record acts of violence or even murder.

Every gang has its own set of tattoos and markings. A few symbols, like a teardrop under one eye to represent either a murder or the death of a loved one, cross gang boundaries. But for the most part the gang-related ink represents specific beliefs or gang affiliations.

When a gang member gets a tattoo, it's often done by another member, an affiliated tattoo artist or a fellow inmate in prison. Both the person doing the tattoo and the person getting it know what it means. If you're thinking of getting inked with a gang symbol just for the sake of style, think again.

Gang tattoos cause trouble in a number of ways. 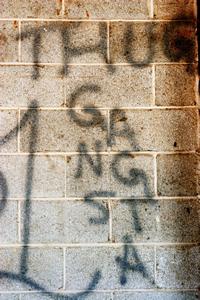 For law enforcement officers, keeping up with the latest gang ink can be a challenge. Officers seem to be torn about the best way to share knowledge about these tattoos. Many police departments and gang investigation units choose not to make the information public, for fear gang bangers will use it. A few police and corrections officers have decided posting information and pictures, including photos of gang tattoos, on the web will help make tracking gang activity easier.

A few photographers have focused on gang tattoos, and you can find occasional magazine articles and books with pictures and information.

Gang tattoos can make it difficult for a former gang member to get a job, make friends and otherwise succeed in life after leaving the gang. That's part of the reason for getting the tattoo in the first place: it's a permanent marker of belonging.

But once someone decides to leave a gang, getting rid of the tattoo can be an important step. That's why some cities and several gang rehabilitation programs offer free or low-cost tattoo removal. In some places, a former gang member can do a set number of hours of community service in exchange for removal of a tattoo.