Girl tattoos will always be popular. Men choose them to show appreciation for the female form. Women choose them to demonstrate female strength and beauty. Girls in ink range from the sexy pin-up to the powerful warrior.

During the first half of the 20th century, "pinup girl" posters featured voluptuous women posing for the camera. By today's standards, these pictures are tame. The women's clothing was much less revealing than what you might see on the street these days, and the poses were more sweet than sexy.

It's exactly that low-key sexuality that seems to appeal to people now. Pinup girl tattoos are acceptable in mixed company: no exposed breasts, no lascivious looks. But they also let the world know that the wearer appreciates a pretty girl.

Here are some places to see pinup girl tattoos: 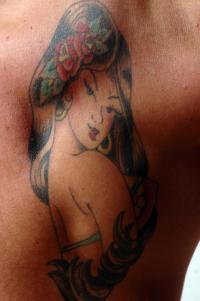 Geisha girls are a great example of fantasy tattoos.

Tats of fantasy girls adorn many backs, shoulders, and biceps. These girls ride motorcycles, sit astride horses, wield swords, or simply offer come-hither looks. They wear spike heels or steel-toed boots, flowing skirts or leather, whatever strikes the wearer as sexy. They're usually large-breasted and wasp-waisted, a not-quite-possible ideal of femininity.

Fantasy girl tattoos can also show more realistic women. A hula girl, a dancer with a lithe body and six-pack abs, or a traditional Geisha girl might look like their pictures were taken from photographs. But there is always something - a sexy pose, a submissive gaze, or a dominant glare - that makes it clear that the picture is a fantasy.

Some fantasy girl tats are about feminine power. Some reflect the wearer's wish to dominate a beautiful woman. Many people will admire a fantasy girl tattoo. But others may be offended by what they see as misogynistic.

You'll find examples of these girls at many online tattoo galleries, although they're usually mixed in among other styles. Try browsing at BMEzine.com or TattooArtists.org.

Feathered wings and flowing hair are the key features of classic angel tattoos, but angels can come in many forms. Dragon scales and bat wings are part of some people's angel visions. Girl angels are usually ethereally beautiful, but they can also be angry or vengeful. Angel styles include the familiar Christian form in flowing robes and a sexier version with wings demurely covering the female body. Goth angels and heavy-metal angels are popular, too. And fallen angels - winged and demonic-looking - are another option. Fairy tattoos, showing pretty girls with insect-like wings, are also popular.

Check out ReligiousTattoos.net for some Judeo-Christian angel tattoos.

Mermaids continue to be a favorite legend. Almost always depicted as beautiful girls, mermaids grace the arms, legs, and torsos of many men and women.

Never Sea Land has a gallery of mermaid tattoos in widely different styles.

Getting a girlfriend's name tattooed over a heart is an age-old gesture of love. Bringing her photo to the tattoo artist for a personalized drawing is even more special. The tattoo can a simple re-creation of a favorite portrait. Or, it can be a creation reflecting her personality and the relationship. Some fantasy girl tats even begin with a real woman's face, body, and style.

Tattoos of daughters are a different kind of girl tattoo. Devoted dads who are also tattoo fans may choose to have tats created from photos of their children. Far from sexual, these girl tattoos represent a father's love, pride, and devotion. They usually show babies or toddlers at their best - and cutest. More permanent than a wallet photo, for tattoo aficionados they're far more meaningful as well.