The Greek key tattoo is a popular design in both the world of tattoos and ancient Grecian design. To many in the Ancient Greek world, the pattern is rumored to have symbolized unity and the infinite power of the Greek empire. To those who choose to get the pattern tattooed on their bodies, the pattern is both aesthetic and can be rich in personal meaning. Keep reading to learn more about the Greek key tattoo design and how to incorporate it into your next tattoo. 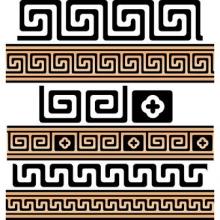 The Greek key pattern is a popular decorative border in architecture and design. Often called the Greek Fret or a meander, the patterns name is also present in Roman art. The pattern is created by a continuous line forming right angles and patterns, similar to squared waves. The waves can face either direction. It is common in moldings and borders. The pattern is usually framed by two straight lines on either side of the design.

Greek key patterns are common both on their own and as part of larger tattoos. Different types of key patterns can be created or found. Sometimes the repeated and connected shapes inside the pattern will be more tightly wound or will be spread out more.

A few ways that the tattoo has been made unique that you can use for your piece are: 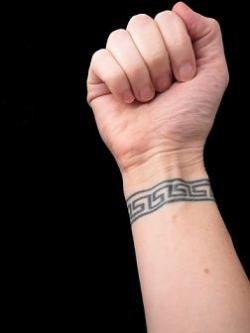 Greek key patterns are popular tattoos because of their versatility. The design is not tied to any one type of design or placement. Here are some ideas for tattoo placement for the Greek key design:

A Note About The Design

Because of the detailed and geometric focus in the Greek key, it is important to remember that part of the meaning the tattoo has comes from it's perfect geometric lines. If one of the lines is not completely straight or is blotchy instead of crisp, the design might not look right. Additionally, it might not have the same meaning that one would hope it has. Be considerate of this when deciding to get the piece tattooed. It is worth the effort to find a capable tattoo artist when something will be on your body for your lifetime. Some geometrically accurate designs can be found online at Tattoospot.com.