Hand tattoos are the ultimate expression of rebellion in some cases. People who are bold enough to get these tats often have a symbol or message that they want the world to see. Hand tattoos are painful, and this is well known. People who can handle the pain often do so to prove a point, such as with gang tattoos. However, the underbelly of a small subculture is not the only place this kind of ink can be spotted.

Probably one of the most well known types of hand tattoos are gang symbols. Often a small set of three dots in a triangular formation on the top of the hand between the thumb and index finger is a symbol that someone has been "jumped in" or become part of a gang. More tattoos can be spotted as a new gang member moves up in the ranks, including the infamous teardrop under the eye to signify a kill, the spider web on the elbow to signify time served for the good of the cause and portrait arm tattoos of those fallen along the way.

The very visible hand tattoo is even seen on today's stars: 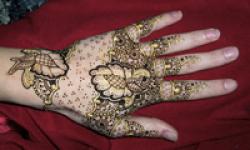 Many people choose the hands for personal or political reasons including:

Hand tattoos are more common in certain circles than others. Some people choose to commemorate loved ones by placing the birth and death dates on the tops of their hands as an ever-present reminder of the loss. In some cases, perhaps the tattoo is a reminder to be a better person for having lost someone.Cultures and subcultures that celebrate the hand tattoo and other more unconventional tattoos include: 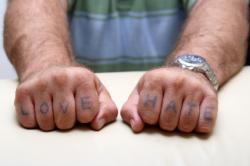 If you are thinking about getting a hand tattoo, keep in mind that it is very visible and also a very painful place to get inked. Hands are also much more likely to become infected because they are the most used part of the body in day-to-day activities. If you do plan to have your hands tattooed, plan to have a few days to yourself so you can keep the new work in a safe environment during initial healing. Before embarking on this or any tattoo, make sure you do your research on inking and skin infections so you can avoid these dangers for yourself. You will also want to look into controlling the pain and, above all, ask your artist every question you have before you begin the tattooing process.