Heavily tattooed women are becoming much more prevalent in society than they used to be. Some onlookers think they're sexy; some think they were better looking before the tattoos. One thing is for sure, though; no matter the motive behind the tattoos, these women have guts.

The History and the Culture

In some cultures, being heavily tattooed is just a part of life. A story from May 16, 2006, in National Geographic showed how heavy tattoos can tell an amazing story. Archaelogists in Peru uncovered a mummy of a Moche elite young woman covered in tattoos.

Today, heavy tattoos on women are still commonplace among certain cultures. Women with many tattoos are nothing unusual in Polynesian culture. Also, who could forget the beautiful and intricate henna artwork worn by many Middle Eastern brides?

Even though it's common place to find women with many tattoos in some cultures, mainstream society still doesn't welcome heavily tattooed women with completely open arms. A woman with multiple, prominent tattoos will still most likely face a certain amount of gawking and endure hearing strong opinions from others.

Why So Many Tattoos? 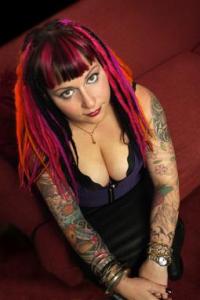 What's the reason behind so many tattoos, a curious observer may wonder.

Some women, just like some men, may want to embark on a lifetime of body art simply to tell their story. Some people write, some people draw and some people perform to show who they are and what they've gone through over the course of their lives. Others become the masterpieces that tell their stories and state their beliefs.

Other women may just be addicted to getting tattoos, as so many women who get tattoos claim to be. They could just enjoy the thrill of choosing something new to add to the menagerie on their bodies. Still, it is the masterpiece of their lifetime, even if they are not choosing deeply symbolic images for their skin.

Although the stigma that used to go along with tattoos - especially tattoos on women - has waned, some people still use them as a form of rebellion or as a way to embrace a counterculture.

So a few of the reasons to get heavily tattooed include:

Although heavily tattooed females have more of a place in mainstream society, they seem to evoke strong opinions from others. Of course there are two sides to this coin; there are those who love women covered in body art, and those who are appalled. In many cases, those opinions won't be kept secret! How do men feel about heavily tattooed females? The reaction varies. Some are completely turned off and/or intimidated. Others seem to love tattoos on women. Still others believe the tattoos don't make the woman, it's the person who matters. 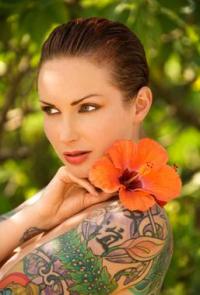 Famous tattoo artist Kat Von D, as you may expect, has tattoos all over her body. She's best known for her work on television shows Miami Ink and LA Ink but she had quite the following long before the show went on the air. Passionate about her work, she has tattoos from the neck down.

Defiant musician Bif Naked doesn't shy away from the tattoo parlor. In her search for spirituality, Bif's opted for several tattoos on her arms and torso. Her first tattoo was an Egyptian eye at the age of sixteen. Since then, she's been committed to the art.

Actress Angelina Jolie is heavily tattooed, with the following designs:

As you can see, women have just as many reasons to get tattoos as anyone else, and they'll continue to push the boundaries of what other people consider to be the norm until they find acceptance.