While it is not as common as it once was to get hepatitis from a tattoo, it's important to be able to recognize hepatitis symptoms if you do develop them. 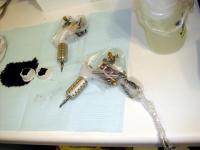 Hepatitis is a disease that attacks the liver. There are several types of hepatitis, and they have different forms of transmission. Hepatitis A is often spread through contaminated food and water. Hepatitis B is spread through blood or sexual contact. Hepatitis C is also transmitted through contact with infected blood, and, very rarely, through sex. Tattoos carry a risk for Hepatitis B and Hepatitis C because the tattoo needle pierces the skin to inject the pigment. If the equipment isn't sterilized and fresh needles and ink aren't used for each new person, a tiny amount of blood from an earlier customer might be injected along with the ink. If that person was infected with Hepatitis B or C, the virus could be passed along, too.

Licensed, properly maintained tattoo shops have medical-quality sterilization equipment and are careful about not re-using needles or inks. It's unlikely you'll get infected at one of these professional shops, although mistakes can happen. Tattoos done elsewhere, even by experienced artists, are more of a risk. Hepatitis is especially a danger with prison tattoos, because it's difficult to keep contraband equipment sterile.

Hepatitis B symptoms generally appear about three months after the infection, although they can turn up as soon as 9 weeks or as late as 21 weeks after a contaminated tattoo. Only about 70% of people who are infected will have any symptoms at all. Type B hepatitis symptoms appear more often in adults than in children. The older you are, the more likely you are to have symptoms.

Symptoms can include one, several, or all of these. They may be strong or mild. For some people, Hepatitis B just feels like a slight case of the flu. For others, it's a serious illness.

For most people with the Type C virus, there are no hepatitis symptoms at all for many years. Routine blood tests may eventually show damage to the liver. In some cases, the virus isn't detected until serious liver damage has already happened.

Mild symptoms do appear in some people early on. These include:

Later on, once liver damage is established, there may be yellowing of the eyes and skin, dark urine, light stools, itchy skin, and swelling of the abdomen.

If You Have Hepatitis Symptoms

If you're worried you may have hepatitis symptoms, see a doctor right away. According to the Center for Disease Control, hepatitis can be very dangerous. About 1 to 5% of people with hepatitis will die from liver failure. Chronic infections can also lead to cancer. Your doctor will examine your eyes and skin, and check for abdominal swelling or an enlarged liver. Hepatitis symptoms can mimic other diseases, so a blood test is needed to confirm infection. Treatment will depend on the type of hepatitis and the severity of infection. The body can usually fight off Hepatitis B, so treatment isn't usually offered for new infections. In people who aren't able to fight off the virus, it becomes a lifelong problem. There are medicines to help control Hepatitis B and C, but there is no cure.

Protection Against Hepatitis B

There is no vaccine for Hepatitis C, but Hepatitis B can be prevented with a three-dose vaccine. If you plan on getting a tattoo, ask your doctor if the vaccine might be a good idea.

Being vaccinated is no excuse for getting dangerous tattoos, though. Always make sure that the shop you go to is clean, that proper sterilization equipment is used, and that your tattoo artist takes precautions to prevent transmitting hepatitis or other infections.