In Japanese culture, few images are as important and symbolic as the dragon. Japanese dragons can be depicted in countless ways, so choose a design and show your dragon traits to the world.

Japanese dragons are heavily influenced by the traditional Chinese dragon, but there are a few specific differences, such as having only three toes instead of four or five. The following info and design ideas can help you decide which kind of dragon tattoo might suit you best.

The faces of Japanese dragons are all the more fascinating because they are not the features of a single creature; they're a fanciful composite of several different animals.

Consider using two or more of these features to create your own, unique dragon face tattoo. 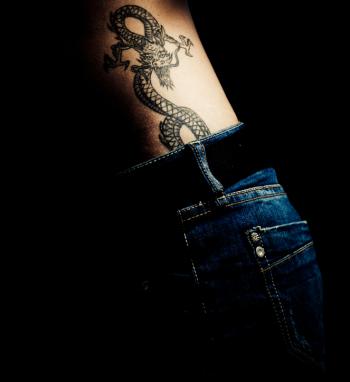 The figures of Japanese dragons are often very snake-like and streamlined, and they don't have the massive wings of dragons depicted by Anglos. The wings are small or non-existent because these dragons don't need them to fly; they use magic instead.

Place a full-length dragon just about anywhere on your body. Popular placements include running the dragon down the length of an arm or across the chest or back. Some Japanese imagery also shows two full-length dragons circling one another. In this type of design, each dragon represents a different element, such as fire and water, and they are locked in a never ending battle.

The Pearl of Wisdom

The Japanese dragons is sometimes pictured guarding the "Pearl of Wisdom." The creature uses it to control the elements in order to help humans prosper.

Design ideas might include the dragon holding the pearl gently between its teeth or coiling its long body around the pearl. The pearl is also considered symbolic of a closed lotus blossom, so you can create a different design by having the dragon guard the flower instead.

There are numerous dragons that are specific to Japanese culture. Use one of these designs to tell a story or show the traits of this dragon:

In Japanese culture, dragons are said to be kings of the north, south, east and west seas. Some dragons are also believed to be "River gods". These various sea dragons can be displayed as:

The Japanese follow the Chinese zodiac very closely, and it's not uncommon for people born in one of the dragon years to get dragon tattoos.

The dragon zodiac sign represents free spirits, and it's identified with bold colors, big ideas and extreme gestures. If you choose a zodiac dragon tattoo, be sure to include some of these traits to differentiate it from other Japanese dragons.

A Japanese dragon tattoo makes a statement no matter how it's depicted. Stylized, colorful and highly detailed, everyone who sees your tattoo will know you are a free spirit.