Kokopelli tattoo designs are an intriguing way to bring the past into the present. Learn more about this popular figure and how you can turn one into a very unique tat of your own.

You may have seen a Kokopelli figure before even if the name sounds unfamiliar. A Kokopelli is a glyph-type drawing of a man playing a flute as his hair flies up wildly from the back of his head. He's either clothed in a simple native dress or presented as a stick figure.

This description may make the Kokopelli sound like a pop art icon, but the image actually comes from very ancient petroglyphs found scratched onto boulders and rock walls throughout the North American southwest region. It's believed the glyph represents the Anasazi fertility god who reigned over the production of crops as well as human fertility. As legend has it, Kokopelli also ushered in the change of seasons with the songs he played on his flute.

This god was also regarded as a symbol of hope, so it's not surprising that his image has been appropriated for tattoo designs. If this simple figure and his story of hope and change appeals to you, you might want to consider the following ideas for Kokopelli tattoo designs. Both the message and the rustic nature of the drawings are very compelling.

From Traditional to Contemporary

Generally, the Kokopelli figure is often just a silhouette without any overlying details. Inking the figure in solid black or any other single color would be the purest representation used for the tattoo. However, body art is meant to be personal, so feel free to adapt the basic design to suit your preferences.You might consider: 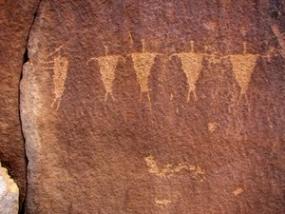 A Kokopelli figure may look a little lonesome by itself, so you may choose to use a variety of other petroglyphs which will add more interest to your total tattoo design. 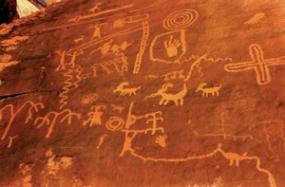 If you're only planning to have a single Kokopelli inked, you have a lot of placement choices to consider. The design would look great on an upper arm, side of the leg or over a shoulder blade. You might want to even consider it for a lower back tat.Multiple smaller figures could be used to create a wrist, arm or ankle bracelet, as well as a very creative sleeve.

Designs with more than one element might look better as a back or chest tattoo, especially if you want to create a full scene to go with the figure.

Click on the following links to see Kokopelli images.