Tattoos on celebrities are still big news, and Lindsay Lohan's tattoos are no exception. This popular young actress/vocalist has gotten inked a few times, with each design having special meaning for her. 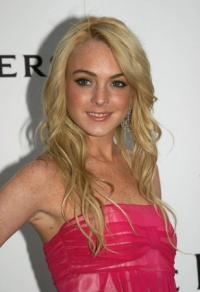 Lohan Lindsay Lohan was born on July 2, 1986 in New York City. She spent most of her early years living on Long Island, with her parents who are both former actors. At age three, she started her career in the spotlight, as a child model for the Ford Model agency. After a few years, Lohan appeared in over 60 television commercials.

At age 10, she was hired to act on the soap opera Another World, and continued her role on the show until 1997 when she was cast in a Disney remake of The Parent Trap. After her success in this movie, she was cast in several other Disney films and TV shows, as well as TV shows for other companies.

In recent years, Lindsay Lohan has become more popular for being in movies like Confessions of a Teenage Drama Queen and Mean Girls. The young star also released two albums, but her personal life has garnered just as much attention as her singing and acting. Lohan's weight fluctuations, love affairs, and health problems frequently make tabloid covers.

The story of Lindsay Lohan's tattoos starts with her first piece of body art, a small tattoo of a star on her forearm. The tattoo is a tiny outlined star in black.

Her second tattoo has more meaning. The Italian phrase "la bella vita" is scripted on her lower backwith a little flourish. This simple, black ink tattoo means "life is beautiful" and Lindsay intended the tattoo to be a dedication to and remembrance of her Italian grandfather. Lindsay said that this tattoo hurt so little that she was able to eat ice cream while she was getting inked.

Lohan's latest tattoo is another saying, or word - "breathe". It is written in script on the inside of her right wrist. She planned to get the tattoo for a while, reportedly having been inspired by the John Lennon quote: “Get out there and get peace, think peace, live peace, and breathe peace, and you’ll get it as soon as you like.” Lohan also says that the tattoo is a reminder of how important life is after she suffered a dangerous asthma attack on New Year's Eve '05.

Lindsay Lohan's tattoos have evidently also inspired a great love for the art of tattoo. It's reported that Lohan wants to open a tattoo parlor of her own, and that she's looking for both business partners and tattoo artists. Lindsay feels that this business will allow her to be more creative. She also plans to merchandise her new tattoo parlor, and hopes that she can run a tattoo studio that caters to celebrities and rich clientele.