Mexican tattoos are a large part of several Mexican subcultures. Many designs, historical, religious and political eras define the Mexican tattoos of today.

The History of Mexican Tattoo 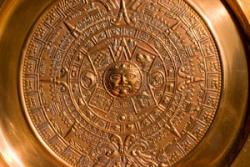 Contrary to common belief, Mexican tattoos began long before the stereotypical ideas about them - the idea that Mexicans have only been tattooing for a hundred years or so is a misconception. Tattoos in the Mexican culture date back to the early 1300s and perhaps before that. Both the Aztecs and the Mexica, along with other Mexican native tribes used tattoos as ornamental and as a way to intimidate foes during battle.

As with other cultural artwork, Mexican tattoos come in many different categories. The tattoos that originate or that are inspired by this culture are as varied as the landscape of the country itself.

Mexican political tattoos can be broken into a few categories:

Many Mexicans who have migrated into the United States for work or family have found the strong resistance from those who oppose their presence. They fight what they perceive to be oppression with art as many cultures have throughout the ages. Often times, Mexican pride tattoos will feature symbols of the convergence of the Mexican and American flags, as if to promote better relations through communicating rather than fighting what is presumably a losing battle for both countries.

Anti-INS tattoos are especially popular in Los Angeles and Mexican-American border towns where "La Migra" endeavors to keep illegal aliens out. Once in, however, migrant workers proudly provide for their families who continue to reside in Mexico. Many of these immigrants will get a tattoo to remember their families and why they came to the United States. Many migrant workers will also get portrait tattoos of wives or children they left behind.

Many Mexicans, especially those who have won the right to legally be employed in the United States will continue to protest in the name of worker freedoms. Along with this revolutionary attitude come tattoos depicting Cesar Chavez and other leaders of Mexican labor movements, such as Dolores Huerta. 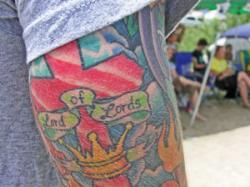 Many Mexicans both residing in the United States and Mexico have strong religious beliefs, generally Mexican religious tattoos focus on religious figures of the Roman Catholic church - including Christ, various saints and predominantly, the Virgin Mary, known in Mexico as La Virgen de Guadalupe. Most Mexicans hold a special place in their hearts for the Virgin and believe that she is often disregarded by Catholics of Anglo-Saxon decent as well as other Christians who focus more on Jesus. Many Latino and Chicano prison tattoos feature religious symbols as well.