LoveToKnow Tattoos would like to present an interview that is very close to our hearts.

A recent Miami Ink story featured members of our own LTK family, Kirk and Holly Swanson, and their son Ryan. Holly is one of our staff writers, and when we learned of Ryan's battle with a congenital heart defect, and Kirk's personal Miami Ink story, we knew we had to go behind the scenes to bring their inspiring tale to light.

Kirk, before we talk about your Miami Ink story, would you please help us understand Ryan's heart condition ?

Ryan was born with Hypoplastic Left Heart Syndrome, a condition that occurs when the left side of the heart doesn't fully develop. Essentially, our son was born without the left side of his heart, and had no way to pump oxygen-rich blood out to his body. The heart can be modified through a series of three surgeries to allow the right side of the heart to do all of the work. In a normal heart, the right ventricle would pump oxygen-deprived blood to the lungs to replenish the blood with oxygen.

In our son's case, the surgeons took his right ventricle, and are using it to pump oxygen-rich blood out to his body, something the left ventricle would normally do. He is not actively pumping blood to his lungs, so he depends on arterial pressure in his body and gravity to get blood back to his lungs. 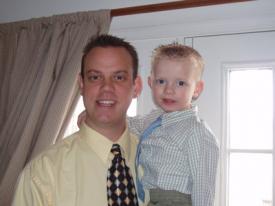 When was Ryan's condition diagnosed?

We actually found out about his heart during a routine ultrasound when my wife, Holly, was twenty weeks pregnant. It was amazing to think that he had a medical problem and was facing surgeries before he was even born.

How is Ryan doing since his surgery?

As of April 2006, he's had all three surgeries and is doing great. He has tons of energy and is a typical, happy three-year-old.

Dealing with such a serious illness must have been quite an ordeal for your family. Please share a little of what you went through.

At first, I think we had the typical "why us?" reaction, but as time has gone on we've gotten used to the situation. It's just become a part of our lives now. Aside from his scars, you would never know that our son has this condition. It has made us appreciate life a lot more, and to not take for granted the time we have together.

Why did you choose to mark this life altering event by getting a tattoo, especially since you'd never gotten one before?

Our son has been through so much at such a young age. He is stronger than I could ever imagine to be. I know that no matter what else happens in my life, this part of my life is permanent and will never change.

In that spirit, I wanted something equally permanent to celebrate our son's life and the gift we received in his new heart. Plus, it has brought awareness to a lot of people about congenital heart defects, which are the number one type of birth defect in the United States. One in one-hundred children are born with some sort of heart problem.

Tell us about the personal tattoo design you created.

The design came from the idea that God had given us and our son a new lease on life. The piece represents God's hands giving us the gift of our son's anatomically altered heart after all three surgeries were completed. That is exactly what Ryan's heart actually looks like now that the surgeries are complete.

You certainly didn't wind up at the neighborhood tattoo parlor, did you? Please tell us all about your personal Miami Ink story.

I've been a fan of Miami Ink since it first started, and I've always been touched by the tribute tattoos that they show. I looked into getting on the show and used their online application and sent in a DVD where I talked about the tattoo that I wanted. 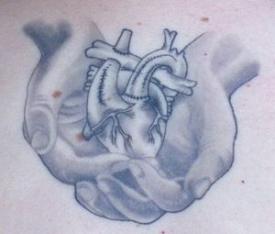 A few weeks went by and I got a call from one of the producers who said they wanted to include it on an upcoming episode. They called me later with some available dates when they were filming and the rest is history.

Filming day took about eight hours from start to finish. There is a lot of waiting and prep work before they begin creating the tattoo. Actually getting the tattoo took about three hours to complete. The first hour there was hardly any talking as Darren Brass, the artist, was completing the outline of my personal tattoo design, which is the most critical part. Once the outline was done, Darren and I were able to talk and get to know one another.

The pain from it wasn't too bad. It's hard to describe the feeling, but it was very therapeutic, and in a weird way, it was like I was giving back some of the pain that our son had to endure. I also realized no matter how much it hurt to get that tattoo, it was nothing compared to what our son felt during his surgeries.

It's funny to see how short the segment was when it aired. I was there all day, but it all boiled down to just a few minutes on TV.

Was the experience of getting the tat and appearing in your own Miami Ink story what you thought it would be?

Getting that tattoo was a very personal thing for me, but I am happy to show it to anyone who wants to see it. The tattoo has strengthened my bond with Holly and Ryan. No one can ever take away what we've been through as a family and we are stronger for it. I can't imagine my life without either of them in it.

Would you ever consider getting another tattoo?

Probably not. The main reason is because I think it would take away from the significance of this tattoo. I suppose if I had something as life-altering as this happen again, I might consider it, but this tattoo is very special, and I don't know that anything could top it. Overall, it was a great experience and I would definitely recommend doing it.

Kirk, thank you for sharing your family's personal Miami Ink story with us. May Ryan continue to grow happy and strong. Any final thoughts you'd like to add?

Remember that tattoos are permanent, unless you're willing to go through a lot of pain and money to remove them. Really take your time and do your research when considering a tattoo. Our bodies are our temples and we should treat them accordingly. I think using our bodies as a canvas to tell stories about our lives is wonderful.

Also keep in mind you get what you pay for. Take the time to find someone you trust, and who knows what they are doing. If you have to pay a little more, do it! The extra money over the course of the rest of your life is nothing compared to having to live with a tattoo you are unhappy with.

If you'd like to learn more about heart health and congenital defects, or make a donation to research, please visit the American Heart Association online.