The tradition of military tattoos can be traced back to the Civil War, with soldiers on both the Union and Confederate sides often getting tattoos to mark their loyalty to the cause. Since the 1800's, each war has inspired its own tattoos, ranging from slogans against enemies to large American flags. Today, each branch of the military has its own rules and regulations about what sort of military tattoos, as well as content and placement for other tattoos worn by service members.

Tattoos in the Modern Military

Military tattoos have become an important part of the tradition of military service. If you are currently in the service and are considering a tattoo, make sure to know and follow your military branch's regulations. 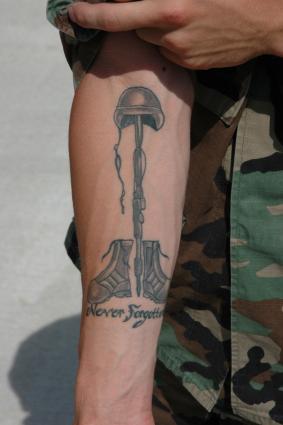 The United States Army has recently revised its policy on tattoos and other body modifications. Previously, any tattoo on the hands or neck would be disallowed, but now these tattoos have been permitted. No facial tattoos are permitted, but visible tattoos on other parts of the body are now allowed as long as they are tasteful and are not "extremist, indecent, sexist or racist". 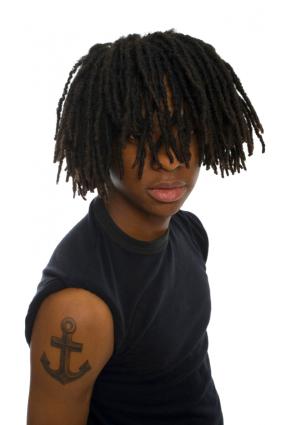 The US Navy allows tattoos of many types, but there are certain limits. No tattoos may be visible on the head or face. There may be no tattoos that are sexist, racist or offensive. 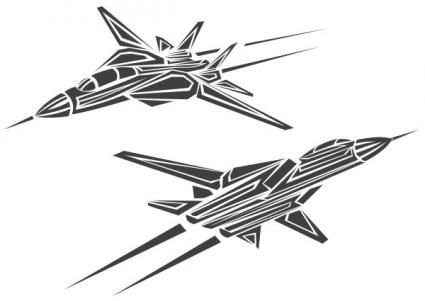 The Marine tattoo policy does not allow tattoos on the head, hands, neck or any other part of the body that is visible when the Marine is in uniform, and sleeve tattoos are considered excessive. Current Marines who have tattoos that violate these restrictions may be allowed to keep their tattoos; however, these tattoos may prevent the Marines from advancing professionally and prevent them from being able to re-enlist. 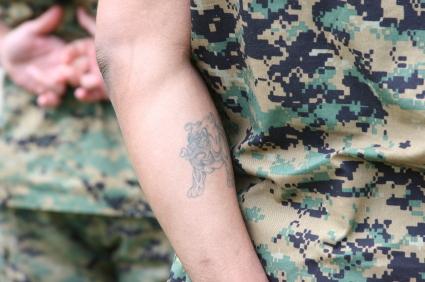 The Coast Guard updated its tattoo policy in late 2009 to allow for tattoos covering more than 25 percent of the body, but the service member's shirt collar must hide any neck tattoos. This policy allows one ring tattoo on each hand and permanent eyeliner tattoos for female service members. You can view the official Coast Guard tattoo policy by downloading this PDF file. 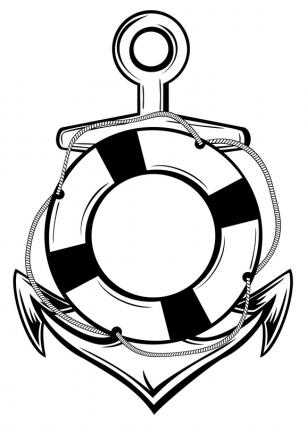 While some tattoos are associated with one branch of the military, these designs can be worn with pride by anyone with a military background.

While you may want to show your pride in your military service with a military tattoo, consider carefully before you get one if you are still in uniform. Regulations may change at any time, and existing tattoos may not be grandfathered in. Once you have left active service, however, let your colors show proudly with any military style tattoo.