Neck tattoos are one of the most visible forms of body modification. Unlike tattoos on other parts of the body, these tattoos in the neck and face areas can't easily be covered, so this is not a decision to be taken lightly.

What are Neck Tattoos?

Neck tattoos are tattoos that are seen on the region of the body from just below the chin to the collarbone. While this area has not typically been as popular a place to inked as spots like the leg and arm, it is growing in popularity. Most tattoos seen on the neck are placed on either the sides of the neck (running parallel to the jawbone) or on the back of the neck (known as the nape). 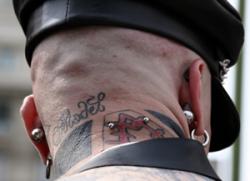 As neck tattoos are the most visible tattoos on the body besides those seen on the face, the type of neck tat that you get can really make a huge difference in your presentation to the public. Tattoos on the nape of the neck, which faces the back and is not generally the first place you see when meeting someone, can be a bit more daring. Women often choose this sort of tattoo when they get their neck inked, because long hair can cover the design if they don't want to show it off.Those who choose to have tattoos on the sides of their neck are usually not concerned about first impressions they might make. These tattoos are extremely visible, and if you get a neck tat done in this area, the whole world will see your design at all times. People who choose this type of tattoo generally do so for one of the following reasons: 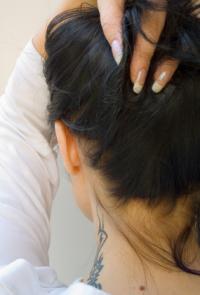 Neck tattoos do tend to hurt more than tattoos in other parts of the body - with good reason. The skin of the neck is thin and close to the bone, with very little fat and muscle padding between these two. The needle comes much closer to the bone, which causes more pain.

Neck tats also take longer to heal than tats in some other places. Clothing can tend to rub on this area of the body, and it is also a very mobile area. Your neck skin is constantly moving, and this creates friction, which makes it harder for the newly inked skin to heal. Tattoos in the neck area can take up to three weeks to heal properly.

Tattoos on the Neck: A Caution

Also, before you plan to get that tat on your neck, be aware that you may be limiting your future employability. Some large chains of stores and cafes, namely places like Starbucks, do not allow facial piercings or tattoos - this often includes the neck. If you won't be able to cover your new tattoo sufficiently, you may have a hard time getting a job where you are in the public eye. The military also has specific rules and regulations about tattoos in the neck and face areas, so if you're planning to go into the Army, Navy, Marines or Air Force, be sure to check up on regulations before getting inked. Regulations are an important consideration whenever choosing to get a tattoo in a conspicuous area.