While many celebrities have tattoos, Pink's tattoos are among some of the most interesting and numerous.

Pink was born Alecia Moore on September 8, 1979 in Doyleston, Pennsylvania. When Pink was just a little girl, she decided that she was going to be a rock star, and she spent most of her childhood and teenage years practicing singing. She was in several high school bands, and she eventually became a backup singer for many artists at LaFace records.

In 2000, Pink released her first solo album, Can't Take Me Home; this R&B record was produced by Babyface. Pink states she wasn't happy with this style or image (pink hair), and she was happy when her next album featured the pop rock style she enjoyed.

Pink's follow up CDs have been hits and include Try This, I'm Not Dead, Funhouse and Lowdown Unauthorized among others.

Pink is known to have at least 22 cool tats, but the exact number is unknown. She has many different styles and sizes of tattoos, and has not chosen to stick to one theme or particular tattoo style. Pink also shows no signs of stopping, and has been quoted as saying she definitely plans on getting more tattoos.

In fact, Pink has said that there's only one tattoo she won't get - and that's a tat of her husband Carey Hart's name. He has many tattoos as well, and many of Pink's name - but she feels that getting a tattoo of her husband's name is not her thing. 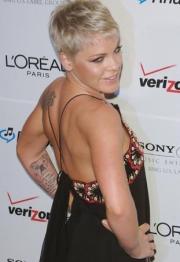 Starting from the top down, here is what is known to be just a partial list of Pink's tattoos:

Of course it is believed there may be more ink on Pink's body, but these are the tats that are confirmed. 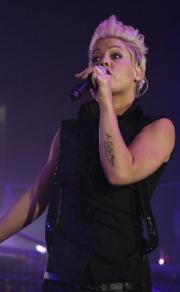 Many people choose to emulate celebrities when they get their tattoos, and since Pink's are so numerous, there are plenty to choose from. There are a few things to remember if you are planning to get the extensive amount of work that Pink has gotten: