Classic pinup girls capture the imagination of both men and women; this may be why pinup girl tattoos are so popular. Pinup models are considered the very essence of the "perfect" woman by many. No matter what situation these girls find themselves in, from lounging on the sofa to working on a car, they are always daisy-fresh, happy, and above all sexy. 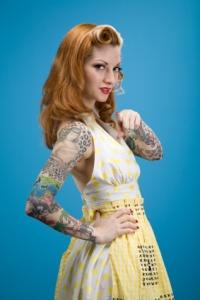 Pinup models became popular in the 1940's. During World War II, these ladies were every GI's "girl back home". Their smiling and flirtatious pictures kept the soldiers "morale" up and pinup images were a staple among their possessions. These ladies' images were also painted on the nose of many fighter planes which sometimes unofficially bore their names as well.

Even though pinup girls were the consummate sex symbols for most of the early 20th century, their pictures were always tasteful and classy. Seldom ever revealing more than a one-piece swimsuit, pinup models relied on expressions and subtle body language to convey sexuality. There is still something so hot about that subtlety, even in today's world of in-your-face sexual expression.

There were many celebrities that made pinup posters, and some pinup models became celebrities because of their posters. A few pinup girls who remain icons even today, and would make a great statement in a pinup girls tattoo:

The ultimate blonde bombshell, Betty began her career as a chorus girl in 1929 in the movie Happy Days. She was just thirteen years old. She went on to reach fame in future movies and become one of the most sought-after pinup models. Her pinup image is included in Life Magazine's 100 Photos that Changed the World.

This pinup model had it all-beauty and brains. This college graduate's uninhibited style made her popular among photographers and ultimately pinup fans. Her photos often contained bondage or sado-masochistic themes. In 1955 she was Playmate of the Month for Playboy magazine and that same year was voted "Miss Pinup of the World".

These women have been historically depicted in every situation and theme, from glamour girls to grease monkies, so there is no end to the setting you might use for this type of tattoo. This versatility also makes these tattoos suitable for men and women. Whether you love their sexy appearance or admire their positive attitude, you can customize a pinup tattoo to express a personalized theme.

Since pinups are usually shown in full length, you may wish to place your pinup girl tattoo on an elongated part of your body. The shoulder and upper arm for men is an ideal place for your glamour girl. Women may also wish to consider a leg placement for a pinup themed tattoo. Talk to your artist about the ideal spot for the model you wish to be inked with; he or she will give you good advice about your individual tattoo.