It seems everything old is new again, including pirate ship tattoos. Why not check out this reinvigorated genre and see what it has to offer?

Resurgence of a Genre

If you've been thinking that pirate ship tattoos were strictly the domain of salty old sailors, it's time to look at these designs with a fresh eye. Yes, they used to be fairly predictable and monochromatic, but that was before Johnny Depp instilled pirates with rock and roll chic. Now, virtually anything goes, and you'll see some amazing work if you browse the flash at your favorite tattoo shop.

Most tattoos have some kind of meaning to the people that wear them, although some people wear ink just because it looks good. Pirate ships can suit both purposes. If you want a dramatic tattoo that's sure to get noticed and asked about, a fantastic vessel will do that for you.

On the other hand, your ship can have some personal meaning if you want it to. Some people view their ship as a metaphor for life. You sail along; sometimes the seas are smooth and sometimes you hit some waves. At times, you'll have to weather a full blown gale, but you keep sailing on gaining experience as you go.

Some people like to play the game of life by their own rules. A pirate ship tat can be used to convey an outlaw attitude. It can also stand for an adventurous personality if you happen to be the type who is not afraid to sail uncharted waters. You never know what you'll find, but the journey is half the fun.

You've undoubtedly seen this symbol before, even if you don't recognize it by this name. The Jolly Roger is the traditional pirate's skull and crossbones, and it has been a favorite subject for shoulder tattoos for decades. If you happen to have this tat, a pirate ship makes a good companion piece. You can even add a Jolly Roger to the flag on any older ship tat for some added attitude.

What good is setting to sea without your compass? These two tattoos work great together as part of a rustic map motif. The compass also works well with the life theme because it's all about directions. 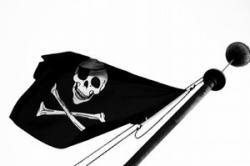 Bluebirds, sparrows and the like are often used by sailors to symbolize how many miles they've covered on the open ocean. Try adding smaller sparrows tagging along above your ship or perching on the crows nest to enhance your design.

Nautical Star tattoos have varied meanings for sailors, but one of the most popular themes is that of the North Star. This is the brightest star in the sky that sailors used to navigate the waters. Any pirate worth his salt could sail the Caribbean or any other sea by this star alone.

Since most tall ship tattoos have a lot of detail in the sails and rigging, they work better as larger pieces. This makes them good candidates for full chest or back murals. However, if you're willing to go with a bit simpler design, you can fit a ship on your shoulder or leg.

Check out pirate ship ink at the following websites:

So What about Johnny Depp's Tattoos?

So, you might think that a guy who played such a strong role in regenerating interest in all things pirate might have a ship tattoo of his own, but not so. Depp has a skull and crossbones, and even a sparrow, but as yet, no pirate ship. Who knows? Maybe if he makes Pirates of the Caribbean IV...