Prison tattoos symbolize toughness or refusal to accept authority. This particular type of ink depicts gang symbols, racist signs, murders committed, or time served. Understand the messages and meanings before you permanently advertise them on your skin.

A prison tattoo bears little relation to the neat, sanitary process that happens in a licensed tattoo shop. Differences include the following:

If you are interested in getting a symbolic or prison-style tattoo, you should first consider getting one from a licensed and regulated shop and artist. In prison, you don't have a choice, and the probability of scarring or infection is a real one. Out of prison, individual can imitate the images and symbols without taking on the risk.

Prison tattoos have multiple interpretations that vary by prison and by culture. If you're choosing a prison-style tattoo, make sure it doesn't have a meaning you don't intend. Research information about racist symbols and their meanings at a reputable website such as the website of the Anti-Defamation League, an organization dedicated to stopping bigotry or the Info.PublicIntelligence.net, a resource on tattoo meanings provided by the Canadian Border Service Agency. 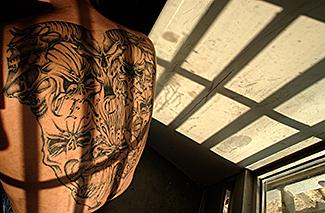 Some prison tattoos show how long the wearer has been incarcerated. 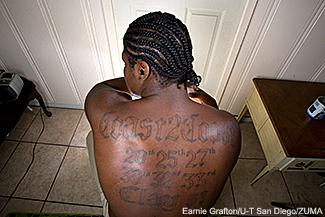 Russian prison tats have become the subject of some interest in recent years. Unlike American tattoos that may vary from one block to another, Russian prisons have a very specific code regarding meanings.

Although many prisoners get tattoos without any complications, prison tattoos can be dangerous.

The makeshift equipment used in prison doesn't always allow for the precision of a professional tattoo, and the work is often done by someone without a lot of experience. This accounts for the rough images found in prison ink. Placing the ink too deep gives the tat a raised surface and can cause scarring. Crooked lines and crude designs are hallmarks of most prison tats.

However, some feel there is beauty behind bars as well. A number of prison-based tattoo artists are quite skilled. In fact, the style of tattooing called "fineline" is believed to have originated in prisons. The style relies on thin lines, made with single needles, to create detailed, realistic-looking drawings that are meaningful. Talented prison artists create shading, copy photographs and ink names, or phrases in a variety of fonts.

A prison tat typically has only one color - most often blue or black, because those are the easiest colors to make. If someone in the prison is able to smuggle in real tattoo ink, multi-colored tats are possible.

There aren't many online galleries for this type of tattoo. A web search will turn up individual pictures or small photo collections. Some interesting ones are:

Getting a Prison-Style Tattoo

Prison tattoos have their fans - and not all of those have been incarcerated. The tats lament a lifestyle that feels like a prison, show an historic appreciation for prison art, or reveal an affinity for the look. Before you rush out to get one, remember that it will be permanent - and not everyone you encounter will be hip to your ironic or appreciative gesture. You could be mistaken for an ex-con, give potential friends' pause, or lose a job opportunity, based on your embrace of prison style. That tat could be really cool, however, give it more than a passing thought before you roll up your sleeve or bare your back.