Rap star tattoos add color to these larger than life musical performers. Their designs are as unique as their talents, and their tattoos can help you get to know them a little better.

Although she sports ink on her bicep, shoulder, wrist and more, Eve's signature tats are her paw print breast tattoos. Situated high on the breast, they're visible in any top that displays a little cleavage, and this sexy rap star likes to show them off. This rapper loves her tattoos.

In an interview with Inked Magazine, The Game revealed that he got his first tattoo, a man holding a globe, when he was in eighth grade. Over the years, his tat collection has grown to include at least 50 designs across his body. His tattoos include tributes to fallen rappers, such as Tupac, covering his right arm and a shout-out to his hometown of L.A. on his right cheek. After getting involved in a much-publicized beef with 50 Cent and G-Unit, he even got a "G-Unot" tattoo on his elbow. With The Game, it's not a question of if he'll be getting a new tat to add to the list, but when. 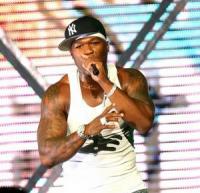 50's most prominent and memorable tat is easily his back tattoo. It features a 50 taking up nearly the entire back, with "South Side" written above it and "G Unit" below. With additional tattoos on both arms and his lower stomach, he's definitely among the most-inked rappers.

Xzibit's most prominent tattoos are the large X on his lower right arm and the Z of similar size on his lower left arm. He also has a 38 inked on his left upper arm in honor of his son. Displayed across his back is Lost Angeles, an interesting play on words that also represents his West Coast background. Additional tattoos on his right upper arm include a Chinese character and an arm holding an axe.

Whether you remember his most recent preferred name or still think of him as Puffy, the man born Sean Combs has chosen a few simple and carefully-placed tats. "Bad Boy" is written on his left bicep, with a cross on the opposite arm. In addition, "God's Child" is inked on his neck.

Despite his preppy style, 'Ye still rocks the ink. He displays his appreciation for the literary with text from a Maya Angelou poem on one arm and a dragon design on the other. 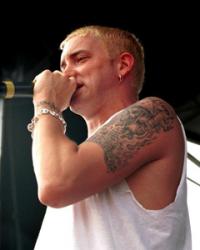 Eminem's tattoos are a window into his life. From the portrait of daughter Hailie on his right arm to the "Rot in Pieces" stomach tat inspired by his ex-wife, this ink provides a deeper look into the mind of the artist than other many other rap star tattoos do. Other designs include a tribute to his deceased uncle and a D on one arm and a 12 on the other for his longtime rap group D12.

Despite his death in 1996, Tupac is still a force in the rap community. The tattoo that was perhaps most evocative of the gangsta rap lifestyle he embraced was his "Thug Life" stomach tat, using a bullet for the I in life. His chest was graced with two small tattoos, "2PAC" on the left side and a Nefertiti bust on the right. Other tattoos across his body included religious imagery, a panther head, and the word "Westside."

Be Inspired, but Don't Copy the Tattoo

Although some fans of rap artists consider emulating their idols by copying their tattoos, in the end, it's better to draw on these designs for inspiration in creating a tat that is uniquely you.