If you're from the southern United States, chances are that you're proud of it - so why not show your pride with rebel flag tattoos?

The rebel flag, as it is seen today, is the source of both pride and a bit of shame for many Southerners. Representative of the Confederate States of America, the group of US states that seceded from the Union prior to the Civil War, this flag can be seen as a signal of Southern pride by some and a signal of racism by others. The original rebel flags were flown in the Confederate States of America between the years 1861-1865. There were a few different designs used during this time.

The first rebel flag of the Confederacy was nicknamed "the Stars and Bars", and it featured three stripes - alternating red then white then red, and a blue square in the upper left. Thirteen white stars in a ring were placed in the blue area. This version of the rebel flag was flown between March 5, 1861 and May 26, 1863.

The second version of the rebel flag of the Confederacy, and the one that we are most familiar with, was adopted on May 1, 1863. Its nickname was "the Stainless Banner", referring to the spotless reputation of the South (at least, within its own mind). This flag was developed because the original Confederate flag looked too similar to the US flag that the Union forces were flying. 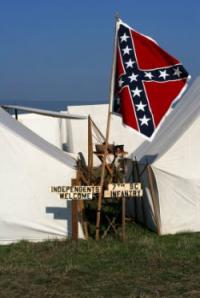 Today, you will rarely see instances of the rebel flag being flown outside of the Southern states that were part of the Confederacy. Most of the states in the South have stopped flying the Confederate flag because of its ties to slavery and severe racism.The rebel flag, also known as the Dixie flag, and sometimes incorrectly referred to as the "Stars and Bars", enjoyed a resurgence in popularity in the mid 20th century, with some Southern soldiers even taking the Confederate flag into battle during World War II. This practice was soon stopped, because of complaints from African American soldiers.

Now, the rebel flag is most often used as a symbol of the South's pride, although it is debatable whether most people view this flag in a prideful way.

The price of the Civil War.

If you are proud of your Southern heritage, and don't feel that the rebel flag is racist, you may want to consider getting rebel flag tattoos. Like American flag tattoos, a rebel flag tat will definitely show the rest of the world that you are proud of your roots. Most tats of the rebel flag will be simple, just a representation of the flag itself, but you might want to embellish the flag with additional symbols that mean something to you. Some might include flames, for the fire of the Southern personality, or even motorcycle logos if you're a passionate biker.

If you want to get some ideas of the rebel flag tattoos that others have, here are some good resources:

Of course, there is always the possibility of having your tattoo mistaken for a racially motivated or hateful image, so it's important to consider this before getting a permanent rebel flag inked on your body. This image is highly controversial, with many people relating it to the death of many Americans and the slavery of a whole race. While you might not mean to be offending anyone with your proclamation of Southern pride, it is a good idea to think about the consequences of any image before getting a tattoo.