Getting tattooed is not a new phenomenon - but some people still consider all ink to be rebel tattoos.

At many points throughout history, tattoos were not considered the rebellious things that they are seen as today. During these periods, tattoos were used for more than just decoration and fun. Dating back as far as 5000 years ago, tats were used in order to demarcate some wearers' status within a culture, or even to show that they were criminals.

Facial tattoos such as the moko seen in the Maori culture were used to determine what tribe a wearer came from, and could be used as a universal signal, breaking the language barrier. Other cultures such as the Aboriginal tribes of Australia tattooed their men in order to mark their passage into adulthood. In later years, groups such as sailors wore tattoos in order to signal their allegiance to a particular crew, their sailing experience and more.

What do all of these types of seemingly diverse tattoos have in common? Well, these tattoos were inked on the bodies of the wearers in order to convey a specific image - and they meant something. These tattoos were actually necessary, not just an adornment in order to look cool, as in the case of today's rebel tattoos.

The tattoos that are inked on today's youth and even older adults are usually done with one thing in mind - showing off an image that the person wearing the tat enjoys. These tattoos can be done for the pure enjoyment of wearing a tattoo (as opposed to being a statement about the wearer) - and also because tattoos are still considered to be outside of the norm, and tattoo wearers are considered to be outside the norm as well. Choosing to have a naked lady tattooed on your leg or forearm, for example, is one of the rebel tattoos most commonly seen on men. This tattoo has little meaning, aside from the fact that the wearer probably does like naked ladies. Instead, the tat is a representation of the side of the wearer that is just a little rebellious, a little bit bad.

One place where tattoos are seen as a form of rebellion much more often than in "normal" society is in prison or jail. These prison tattoos are one of the few contemporary types of tattoos that serve a dual purpose. They are not only rebel tats, they also do convey meaning. A prisoner might get a tat inked on himself while incarcerated for the purpose of showing off his crimes. Or, he might just get an image that shows just how rebellious against society he truly is. For either reason, once the prisoner leaves the society within the prison walls, his tats will definitely be seen as rebel tats.

Want to Be a Rebel? 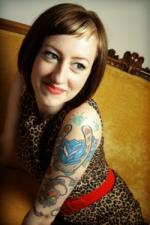 If you decide you want to get a tattoo for the sheer rebellion of it, and not to show off some deeper meaning, you have many, many choices of images and types of tats. Most people who get these tattoos will pick an image that both appeals to them and is eye-catching to the public. This can include things like flames, motorcycles, logos and skulls - all of which can be representative of deeper meaning or can be just for fun. Other examples are of items that would be considered rebellious - guns, women and gambling, for example.Rebel tattoos are often gotten on a whim, which can end up as a problem when later in life you are saddled with a flaming dagger tattoo. Be sure that you can deal with the fact that you're wearing a tattoo just for the sake of wearing one before you get that ink done. It's much more difficult to remove a tattoo than to get one done!