Rooster tattoos? That's right. This beautiful fowl, mainly viewed as a barnyard alarm clock in the West, is a highly venerated creature in the East. Now doesn't that make you want to know more about him?

The Rooster in Eastern Culture

When you begin contemplating possible designs for a tattoo, the rooster is probably not something that immediately springs to mind.

Sure, they're actually quite beautiful when you take the time to look at one closely. The feathers are iridescent and magnificent, and the bird carries itself with an air of pride and authority. But still, is this the stuff great tattoos are made of?

The answer to that question is yes, especially when you learn how these noble birds are perceived in many cultures. 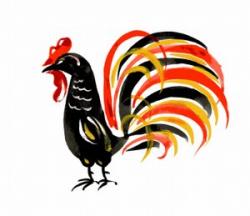 In Eastern culture, the rooster is ascribed five virtues:

According to Chinese zodiac lore, anyone born in the Year of the Rooster, is likely to be confident and capable, and able to bounce back from any setback. People born under this zodiac sign are also thought to be naturally beautiful with great sex appeal. They are completely at ease with themselves wherever they go and prone to speak their minds. Sounds like they have it made, doesn't it?Previous Years of the Rooster were 1921, 1933, 1945, 1957, 1969, 1981, 1993, 2005, and the next one is scheduled for 2017.

Buddhists believe the rooster's famous morning call awakens the Goddess Amaterasu, so they consider these birds sacred and allow them to run freely in the temples.

Now that we've covered the rooster's more noble qualities, it's time to move on to rooster tattoos.

Drowning at sea has always been a chief concern for sailors, as a surprisingly large number of them couldn't swim in the old days. A tradition developed of tattooing a pig on the left foot, calf or knee, and tattooing a rooster in the matching area on the right leg.

Why did they do this? Roosters and pigs were kept in wooden crates on shipboard, and if the ship happened to sink, these crates would float, giving the animals a better chance of survival than many of the sailors. Perhaps the sailors thought the tats would bring a bit of the animals' good fortune?

The fighting rooster is another popular tattoo design. In Mexican culture, the rooster is a symbol of machismo because of its willingness to defend its territory against interlopers.

Fighting rooster tattoos may also refer to the dubious sport of cock fighting, where two animals are pitted against each in a fight to see who will be victorious. Sadly, many roosters are injured or killed in this activity, and it is illegal in many regions.

If you love the idea of what the rooster symbolizes to a particular culture, but you still can't quite reconcile yourself to the notion of having a barnyard animal inked on your flesh, don't give it another thought. 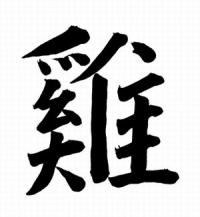 Kanji, a series of Asian symbols, have become incredibly popular with tattoo enthusiasts. There are symbols for love, peace, purity, strength and more. And yes, there's even a symbol for rooster, so you can express the way you identify with this noble animal without having a single feather tattooed. This design is very chic, and it will certainly become a great conversation starter when someone asks you what your tattoo means.

Aside from all the symbolism, these birds really are beautiful creatures that lend themselves to creating spectacular artwork, and many people have no qualms about going for a full bird tat.

Rooster tattoos need not be completely true to life. They can be worked into fabulous fantasy versions of the real thing. The tail is the most popular area for artists to take license, and the plumage can be made quite magnificent if you're willing to let your imagination take the lead.