Sailor Jerry, born Norman Collins in 1911, is considered the prodigal grandfather of the Americana tattoo culture and style. The white haired, mustached artist would ink his clients while smoking a pipe and chatting about his war days. Today both he and his ink are legendary. Both the original designs and letters of Collins are currently protected by Sailor Jerry, Ltd., which is owned by Norman's protégés, Michael Malone and Edward Hardy.

The onset of this historic career began when a young war torn Collins took up residency in Hawaii's Chinatown as a young apprentice to native artists there. He learned traditional Polynesian and Asian methods and honed his own style now known as the standard in the modern tattoo industry.

Once you have seen a few Jerry tattoos, you start to sense a theme. Bare women with long lashes, lots of wild and poisonous animals, ships at sea with large and multitudinous masts, dice, bottles of booze and other symbols that epitomize the American male persona over the past 50 or so years.

Those pin-up girls you see on the forearm of every guy in your local watering hole? Whether they know it or not, each and every one of those scantily clad beauties riding a snake or waving a hand at a banner that reads "Born to Lose" is a Sailor Jerry inspired original. Other popular symbols include: 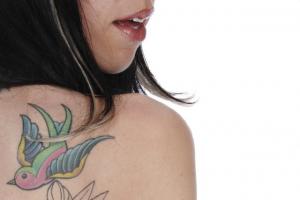 Essentially anything that can be used as a symbol of what Collins would have called "Man's demise" can be incorporated into a Jerry styled tattoo. The overall message most of the time is that you cannot win for losing, nothing is going to go your way and of course, hard times have shaped you and made you are hard - and hard to deal with man or woman.

How Has It Lasted So Long?

Don't be fooled - Sailor Jerry tattoos have not lasted such a long time. For a period of years, tattoos like Collins' were not the mainstay - in fact, they fell off the radar for quite a while during the late 1970s and all through the 1980s. It was not really until the mid 1990s that the quintessential Sailor Jerry look came back into the limelight. At a time when the 1950s came back into style, when girls first started to cut straight bangs into their hair again and boys started to cuff their jeans just as they had in the late 50s and 60s, the pin-up girl and caricature-like, cartoonish sketches of Norman Collins came back into the tattoo mainstream

Why Norman's Designs Will Live On 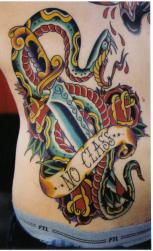 The Sailor Jerry tattoo story is a long and tumultuous one that deserves respect and recognition. The work of Norman Collins may come in and out of style as other types of tattoos take the front seat over years. That being said, Kanji tattoos, tribal tattoos, other kinds of Americana (mainly influenced by Jerry designs) and Chinese tattoos go in and out of style cyclically while the work of Collins lives in. A Sailor Jerry may not always be in the mainstream, but the overall message and style resurfaces all the time and enjoys a great deal of popularity when it does.

There are many Hollywood A listers and other famous people with Jerry tats or ink that is clearly inspired by the work of the late Norman Collins.