Considering getting a tattoo is a big decision. Opening your own shop can be an even bigger one. However, understanding the laws that regulate your state can make your head spin, since state tattooing laws differ throughout the U.S. Some states even leave regulation up to cities and counties, which can make this even more confusing.

There are two main reasons for tattoo laws. The first is the legislators who don't like tattoos and who think they're immoral or wrong. These legislators may use their influence to make tattoos illegal or put restrictions on them. The second, and more common, reason is health concerns.

If the shop isn't clean and the equipment isn't sterilized, getting a tattoo can be risky. Blood-borne infections like hepatitis B, hepatitis C, and HIV/AIDS can be transmitted by a tattoo needle that's been used on another person. Inks can harbor viruses or bacteria if they're used on multiple people. Dirty surfaces in the shop and unwashed hands are also sources of potential infection.

Legal in All 50 States

Oklahoma was the last holdout with tattooing still outlawed there, but as of November 1, 2006, it is legal to get a tattoo in all 50 states. However, it may be city laws, not state tattooing laws, that determine whether you can get inked in your hometown. Just because tattoos are legal in a particular state or city doesn't mean just anyone can set up shop. In many places, a tattoo artist must be licensed and the shop must pass inspection, either by state or local officials. Some places merely require the artist to register with the state. Only in a few places are tattoos not regulated at all. 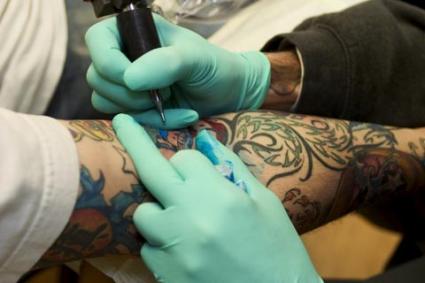 Many states stop at requiring that artists be licensed and that shops have good safety practices. Some locales have more stringent regulations about who can get a tattoo and of what type. Some regulations include:

Per the National Conference of State Regulators

To find local tattooing laws, start with the state's website. Every state has a health department, and many have a section on tattoos. A few states regulate tattoos under unexpected departments, such as the one that's also responsible for restaurants.

For city and county laws, again try the web. Look to see if there is a local health department, or search "tattoo" on the local government's website. You may need to get on the phone and call the local offices to get the information you need.

There are many things to consider when getting a tattoo, and since the laws vary by state, things can get muddled fast. For example, if you are in another state, you can get a tattoo. However, if you are under the age of 18, this can get a bit tricky. Since tattoos are regulated heavily for minors and the ages of consent are different for different states, according to the NCSL, you might not be able to get a tattoo outside of your state. Some artists will ignore the state tattooing laws if you're a friend, however, remember the artist is risking his or her license and could even be prosecuted for breaking the law.

Since the laws vary by state, tattooing in multiple states can be tricky as well. For example, if you work in a state without regulations like Minnesota, but want to tattoo in North Carolina, then you would be required to follow NC state laws. This means that you might be required to get a temporary license or regulation to tattoo in a different state. However, if you are tattooing in two states with minimal regulations then tattooing between the two might not require any special considerations.

Check the Laws Each Time

Laws can change over time as many states become more lax about allowing tattooing in general, but some can become more stringent as well. Check the laws in your state each time before you get a tattoo to keep yourself safe and get your ink done right.