Tattoos and piercings are at the forefront of the body art movement in America and all over the world. While the concept of body modification for the purpose of personal expression has extended to encapsulate far more alarming practices (such as scarification and surgical implantation), tattoos and piercings are the route chosen by most enthusiasts. Because of the increasing popularity of these types of body art, they have moved from being on the so-called lunatic fringe and are now, to a certain extent, a part of mainstream society.

The History of Tattoos

Tattoos and piercings are a part of ancient human history. Both methods of body decoration have been used for centuries either as artistic expression of the self as they are now or, more commonly, as a way for tribal peoples to denote social status, express some religious significance and denote one's marital status. Although tattoo designs have most certainly evolved over the ages and piercing methods have become more sanitary and safe, neither of them are anything new.

Tribal tattoos are an obvious throwback to the roots of tattooing, with different designs and styles originating from different parts of the world and many of the cultures that practiced tattooing also practiced body piercing. Tribal piercing was quite different than the body piercing we practice today, but many of today's piercing styles are direct descendants of tribal styles.

Many claim sailor William Dampher was largely responsible for re-introducing the art of tattooing to the western world. In the late 1700's, the exploits of Captain Cook were among the most popular stories told in London. After one expedition to the South Seas, Cook returned with a Polynesian named Omai. Like the Painted Prince before him, Omai was also a huge hit in London. This time tattooing caught on as British aristocrats began getting small tattoos on the sly. Tattooing became a bit of a fad, but it was still relatively unattainable for most people because it was a slow, arduous and painful process. In 1891 an inventor named Samuel O'Riley obtained a patent for the very first electric tattooing machine. Based on an invention of Thomas Edison's, the tattoo machine included moving coils, a tube of ink and a needle bar. Today, over a hundred years later, tattoo machines work the same way. 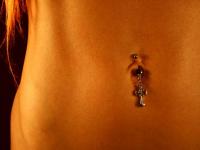 Body piercing evolved in a similar fashion, with various piercing styles considered acceptable by different cultures at different times in history. As little as thirty years ago in the US, for example, pierced noses, lips, nipples and genitals were unheard of and would have been absolutely shocking to most people. Today all of these are commonplace. While the number of people who pierce their genitals is still comparatively small, no one really reacts with shock when they hear of someone who has had it done. All of these piercings have been practiced regularly at some point in history. Even the famed "Prince Albert" piercing (which is a piercing in the penis) comes from one of the most infamously sexually repressed societies, Victorian England

Tattooing and piercing certainly have a fascinating history. However, the community is arguably more active and vibrant in the 21st Century than ever.

People get tattooed or pierced for a variety of reasons. With tattoos, the meaning of one's ink varies greatly. It can be memorial, commemorative or just plain pleasing to the eye. Similarly, a person can get pierced as a rite of passage or just because they think it looks nice. In the case of genital piercings, you might wish to get them to enhance your sex life.

Just about every city of any size has a tattoo and piercing shop, but be careful where you choose to get inked or pierced. Look at shop portfolios to see if the work is to your liking. Talk to your friends, coworkers and acquaintances and see what they have to say about their body modifications. You can also read customer reviews at places like Yelp. Customer service is an important part of the experience.

How Does It Work?

The tattoo machine hasn't changed much since it's invention. A power supply drives a needle under the skin to lay down ink. Needles come in different gauges and sometimes are strapped together for shading. Outlines are generally done before shading; you may have to go back in for subsequent sessions for big tattoo or to get a smaller one touched up when the ink runs.

Piercing isn't too different, except only one needle is used. The piercing needle is hollow, unlike cartridge piercings which are solid. The former removes a piece of skin, while the latter merely pushes it out of the way. The jewelry is inserted in the back of the needle and pushed through with it. When the needle is removed, the jewelry remains in place. You may be able to get a topical anesthetic to make things a little easier.

Sitting in the Chair

Getting tattooed or pierced for the first (or second or tenth) time is always an exciting experience. Walk with your head held a little higher on the day you get modified, with a little extra spring in your step. Don't forget to pass a good word along about where you got your work done so other people will know where to go.