Tattoos are no longer reserved for bikers, soldiers and other tough guys; in fact, tattoos for women are becoming just as much the norm as tattoos on men. They don't just grace the bodies of celebrities, either; today many everyday women, from professionals to stay-at-home moms, are getting tattoos.

History of Women and Tattoos

One of the first famous tattooed women was Betty Broadbent. Starting in around 1927, she began an illustrious career with Ringling Bros. Barnum and Bailey Circus. Betty was one of the first women ever to have a full body tattoo, and also one of the first to be tattooed by the "new" electric tattoo machine. Her full body tattoo was done by a New York artist named Charlie Wagner, and after getting tats all over her body, she displayed them in the circus side shows, earning quite a bit of money (and reputation). Eventually, Betty became a tattoo artist herself and worked at the job until her retirement in 1967.

Many other tattooed ladies helped make tattoos for women more popular. While most females who had a lot of body art stayed in the circus arenas, others broke out into modeling and other entertainment avenues. 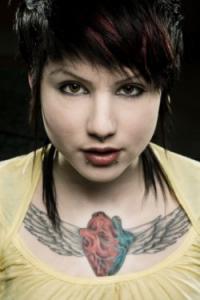 The types of tattoos that women choose to get are as diverse as women themselves. One famous tattoo that has been reproduced many times on the bodies of women is a small heart tattoo that was first inked on Janis Joplin. Just before her death, Joplin got this heart inked over her left breast, completed by famous tattoo artist Lyle Tuttle. In the year after her death in 1970, Tuttle estimated that he completed over 100 copies of this famous heart.

Hearts make a great statement for many women, who want to have something permanent to remind them of a person they love. Some choose to get these tattoos with a name inked in a banner across them, in order to memorialize or pay tribute to an important love. Others just like the beauty of a heart tattoo. Of course, there are many other images that are seen as "women's tattoos" besides a heart.

Many tattoo enthusiasts also see flowers as tattoos for women, although the first floral tattoos were inked on men. Butterflies, fairies, dragonflies and other delicate images are also primarily tattooed on women. Other women eschew the idea of a female tat, and decide to get tattoos that would usually be seen on men. These include tats of skulls, snakes, dragons, daggers and various other images that are usually seen as male.

Another type of tattoo that is often seen on a woman is a male-oriented tattoo that has been given a bit of a female flare. Some women may choose to get a dragon tattoo, for example, but have it colored in such a way that it is unmistakably female. Other examples are flames (colored purple and pink instead of the traditional red and yellow) and skulls that have flowers intertwined in the design.

While women have been tattooed all over their bodies, there is no denying that there are a few areas that tend to be more popular and frequently inked than others. These include: 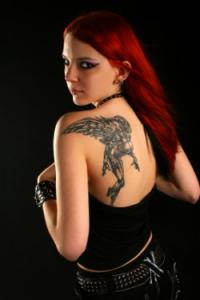 There is a wealth of information and examples on the Internet of women's tats. Places to get more ideas include the following:

Remember, the tattoo you choose should mean something to you - and not just be what society dictates as a "woman's" tattoo. Pick an image that's important to your life.