Legends of the Unicorn

Was the Unicorn real or just another mythological beast? No one can say for sure. To date, no fossils have been found. All we have are thousands of stories, paintings and tapestries depicting a creature of unusual grace and beauty.

There are many popular legends surrounding the Unicorn. Here are a few:

The Unicorn's single horn was so unique that legend tells us it had magical powers. There are stories of the beast dipping it's magnificent horn in rivers, lakes and streams to purify the water for drinking.Other tales tell of the medicinal benefits of ground Unicorn horn, including using it as a cure for the plague.

Legend also has it that the Unicorn was an immortal beast and that even if one succeeded in killing one, the animal would return to life. This story is similar to that of another mythical animal, the Phoenix.Most currently, the Unicorn played a role in the popular Harry Potter series. The evil Voldemort was able to sustain his miserable existence by drinking the blood of the Unicorn, even though it was considered a terrible sin to kill one. 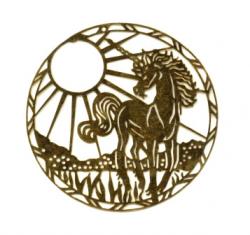 Perhaps the best known legend surrounding the unicorn is the one linked to its purity.

It's said that even the greatest hunters could not trap the Unicorn, and the only way to lure one in was by leaving a virgin waiting in the woods. The mighty Unicorn would be irresistibly drawn to her and would kneel down to lay its head in her lap. Only then could the hunter sneak up and slay the beast.

If any part of this story is true, one can only hope that not all maidens were so cruel with their charms.

Most Unicorn tattoos start out with the basic imagery of these beautiful animals; the body of a horse, usually white, and a single horn rising proudly from the forehead.

From here, many other design elements can be added to the tattoo to make it truly unique. Popular additions include:

Although the Unicorn is nearly always pictured as being white in keeping with its symbolism of purity or virginity, the beast can really be any color. Some of the most dramatic Unicorn tattoos are black silhouettes. 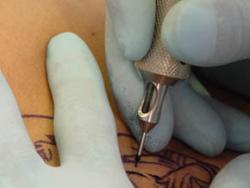 Unicorn tattoos are almost exclusively worn by women, who seem to identify more closely with the romantic imagery the animal represents. Young women who make a vow of chastity until marriage, and "born again" virgins who want to reclaim their purity through sexual abstinence have also adopted the Unicorn as a symbol of their vows.

Still others are fascinated with the Unicorn purely for its fantasy value, along with fairies and angels.

Whether you believe Unicorns ever truly walked the earth, or you just think they look cool, they definitely inspire some terrific body art.

If you'd like a Unicorn tat of your own, find a picture you really like and let your tattoo artist use it as the basis to create an original design just for you.