Vince Hemingson is the brain behind Vanishing Tattoo, one of the hottest tattoo showcase sites today. He is a modern Renaissance man, with work in the film industry, corporate finance, and the writing world under his belt. In addition to this impressive resume, Vince is also a tattoo historian, and he gave LoveToKnow a sneak peek into the ideas behind his popular article, "World's Hottest 101 Women with Tattoos".

What made you decide to do an article on the 101 hottest women with tattoos? 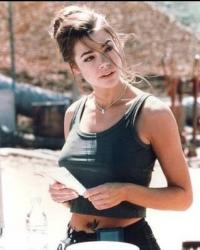 VanishingTattoo.com has been compiling information about tattoos and body art online since 1998, and one of the things we found surprising, even astonishing, was how little most people actually knew about the incredibly rich history of tattooing. One of the ways we found to introduce tattooing and body artin an interesting - and very non-threatening way - was to mention some of the many historical figures and modern celebrities who had tattoos. It was such a fascinating list because it included kings and royalty, presidents and pop singers, rock stars and supermodels, famous writers and all manner of individuals who you might never suspect would have had a tattoo. So the list served the purpose of overturning a lot of the stereotypes and preconceived notions about the kind of people who had tattoos - which to most people in the '90's was still bikers, outlaws, members of the military and others on the fringes of "polite" society.In 2002 I was thumbing through a men's magazine, I think it was FHM if memory serves me correctly, which was publishing their annual list of the "The 100 Sexiest Women in the World". It struck me that a lot of the women on the list, musicians and models and film and television stars, were all very well-known, made their living in part because of the public perception about their physical beauty and a huge percentage of them had body art. We figured if the sexiest women in the world had tattoos, the world had a right to know about it! Interestingly, we had to do a lot of research and digging, because so many of the models and actors had their tattoos air-brushed or covered-over in their photo shoots. So I wrote an article for our web site and sent out a press release.

The mainstream media picked up our content and we were kind of stunned by the response. It got reported on all over the world, in print, on radio and even television. We also had a lot of credibility because we had just shot a documentary for National Geographic on traditional tribal tattooing among the Iban people of Borneo. It didn't take long for lots of other web sites about tattooing to start copying our content about celebrities and tattoos - although we choose to think imitation is the sincerest form of flattery! Simply put, there is widespread public fascination with celebrities and their lifestyles. One only has to look at all the reality television programming these days to realize that fact.

After years of looking at other people's lists, from FHM to Maxim to Playboy to AskMen.com, and pointing out the celebrities with tattoos, we just thought it was time for fans and enthusiasts of tattoos and body art to have their very own list - hence the birth of the 101 Hottest Women With Tattoos!

How did you go about ranking them? Were the decisions difficult? 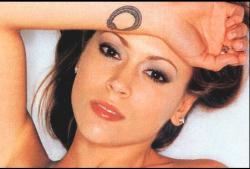 Wow! Great question. We mostly let the visitors to our web site decide. We usually get about a million visitors a month to the web site and we have this enormous data base of search term inquiries, so we had a pretty good ranking system already of the celebrities that were being actively searched for and their tattoos. We also looked at the number of fan sites and media references to the celebrities with tattoos. Once we had a rough list of over two hundred celebrity women with tattoos we started going through them. Our hats are off to the magazines that do these lists because it was a huge amount of work and took several months and hundreds of hours. We really wanted to include celebrities who clearly love their tattoos and we wanted to have many different kinds of women, in terms of diversity, ethnicity, age and body type. Our list included the opinions of both men and women. And we also went looking for celebrities with tattoos that some people might be unfamiliar with. We even have a vegan chef with tattoos!

In the end, there are people not on the list that I really wish were. I initially thought we would have trouble coming up with a list of 101. And there are people on the list with very small tattoos, but so many people inquire about them that it was simply impossible to leave them off. It was a much tougher job than I thought it would be, in terms of time, work and making the actual decisions. We agonized over leaving certain people off the list. If you're a tattooed celebrity and you're not on the list - we still love you!

Angelina Jolie ranks as number 1... was that a consensus among your editors, and is she your personal top tattooed lady? 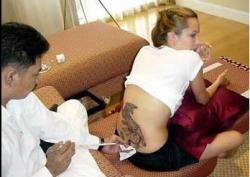 When it comes to tattoos, celebrity and the internet, there is Angelina Jolie and then there is everybody else. It's not even close. The only woman who has ever been like Angelina in that respect is Pamela Anderson. We adore them both because they are both true enthusiasts of body art and they wear their ink proudly.

Are there any celebrities out there that you think should get a tattoo but haven't yet?

Tattoos are such a personal decision that it really is a matter of personal choice. But frankly, I will admit there are a few celebrities who I am surprised don't have a tattoo yet...

What do you think is the sexiest type or style of tattoo seen on a woman?

Beauty is in the eye of the beholder. Attitude is sexy. I like women who are confident enough to get a tattoo design that accentuates the natural lines of their body, speaks to them on several levels, both as art and as symbolic statements, and that they are not afraid to flaunt. And if they have the courage to get a larger tattoo design - Yeah, Baby! That's sexy!

Vince Hemingson (along with the rest of the VanishingTattoo site) has a tough road ahead, with more celebrities getting inked each year - the choices will only become more difficult. If you'd like to learn more about Vince, or maybe even drop him a line, click here for contact information.