Considered to be both magical and mystical, Wiccan tattoos can certainly cause a stir, depending on your point of view. Come learn more about the "Old Path" and its symbolism, then decide for yourself if they're worth all the controversy.

Although there are no set rules to Wicca, it's generally considered a Neopagan religion that loosely mixes the worship of nature with magic. Some scholars claim Wiccan practices are an extension of witchcraft, but since members must be initiated into the religion and are urged to keep silent about ritual practices, Wicca remains shrouded in mystery. This undoubtedly gives the practice some of its glamour and appeal.

Let's break Wicca down into its simplest elements: 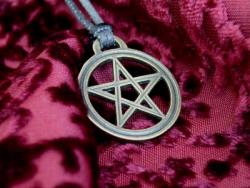 The Goddess is a central figure in Wiccan worship, and Wiccan tattoos portray her in many ways.

The male counterpart of the Goddess is viewed as her equal in some Wiccan traditions and her subordinate in others. Some sects consider him of no importance whatsoever.His imagery includes: 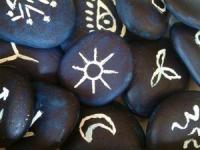 The relationship of the God and Goddess to the sun and moon aside, not all sun, moon and star imagery is considered a strictly Wiccan theme. This imagery experienced a huge surge in popularity at the turn of the millennium when "New Age" themes became the current rage. Wiccan tattoos might use these symbols in their simplest forms, or use the outlines to create fantasy images for the God and Goddess. There really is no limit beyond the artist's imagination.

Pentagrams and the Elements

No discussion about Wiccan tattoos could ever be complete without touching on the imagery of the pentagram.The pentagram, sometimes referred to as a pentacle, is a five pointed star, often wrapped in a circle. The five points are meant to represent the traditional four elements of earth, fire, water and air, and the non-traditional fifth element of spirit.

To some, the pentagram symbolizes the five elements and their relationship to the Earth and each other as simple forces of nature. To others, the symbol (when shown pointed downward) is attributed an evil connotation often associated with Satanic rituals and worship - although today this is more likely due to its use in modern horror films. Wiccan rituals are surrounded in a deep vale of secrecy that makes it hard to either confirm or deny how the pentagram is actually used.

Bottom line, the pentagram is bound to have a very personal meaning to the person wearing the tattoo, a meaning you won't discover unless you ask him/her about it.

Whether you are a practitioner of Wicca or not, there's no doubt that there is some fabulous imagery involved here that lends itself to creating some awesome tats. Just be sure you understand the meaning of any symbol you might choose to use as a basis for a tattoo, because you're bound to be asked about it.