Wristband tattoos are a great way to adorn your body with ink. Prominent and up front, these tattoos were meant to be seen and shown off. From a thin line of Celtic knotwork to more elaborate designs, a wristband tat will always be popular. 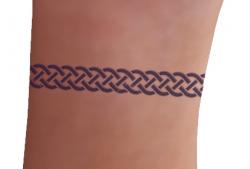 By far, Celtic styles are the most popular styles of wristband tattoos, specifically Celtic knots and bands. The variants of Celtic styles can be seen in Irish tattoos or those from Scotland. A typical Celtic knot starts with intricately "woven" lines that form angular and boxy or curvy and smooth styles. Some Celtic knot patterns have specific meanings, such as those relating to marriage, while others are simply variations created for their beauty. Other Celtic symbols, such as Celtic crosses, shamrocks and thistles (for those from Scotland) can be added to a Celtic band. 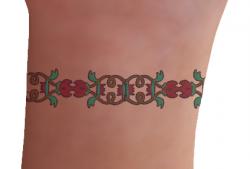 Flowers are another popular choice for wristband tattoos, especially among women. Whether it's a vine of one specific type of flower, a chain of roses or ivy intertwined with other blooms, floral themes are in demand. Getting a single rose with the stem curling around your wrist would be a fairly unusual, but attractive tat. Floral imagery means that these pretty tats are also more accepted than some other styles of tattooing, as even many non-enthusiasts actually find them to be attractive. 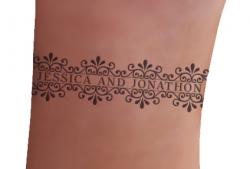 Name tattoos are another popular wristband style. You might choose to have your own name inked around your wrist or that of someone who is close to you or that you especially admire. For example, you could have the name of "Jesus Christ" circle one wrist if you want a tat that expresses Christianity. This is just one option, but it gives a small idea of what you can do with names. 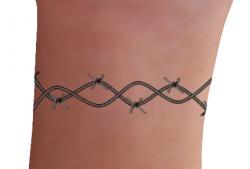 Many people love this style because it is simple, but it can also be modified to be more unique. For example, the barbed wire can include scars or droplets of blood to accent the spikes. Make the spikes as large or as small as you like, but try to get at least a few across each plane of the wrist for best effect. 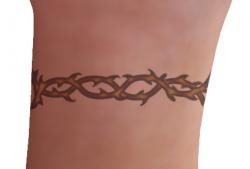 A string of rose bush thorns around your wrist can also make an attractive tattoo. You can accentuate the thorns with a rose on the inside of your wrist if you like, or leave them bare in a bracelet style.

Best known for being a tattoo that goes around the arm, tribal tats can also be made to fit around the wrist. Before choosing this style, consider that the inking may be more painful than most, considering all of the filling-in that is needed.

If you like the idea of a wristband tattoo but don't want to stick with popular designs that are commonly seen, you can always choose an option that goes beyond the ordinary. If you want to express just how unique you are through your wrist ink, consider one of the following options:

A Tattoo to Be Seen

While wristband tattoos are popular and seen on more than a few men and women, it is important to note that these tattoos are hard to cover up. Long sleeves may cover a wristband, but there is always the chance that your tattoo may peek out from under your clothing. Since the wrist is very close to being the hand, some employers may not allow wrist tats. If you are currently employed, it's always a good idea to check with your boss or employee handbook before getting any new and potentially visible tattoos.