Whether or not people are becoming addicted to tattoos has become a topic of discussion in psychology in recent years. While research is limited, experts can lend some insight on whether tattoos are a passion or addiction.

While there isn't a set definition, the term tattoo addiction seems to be aimed at people who get multiple tattoos or those with full body tattoos, possibly in a short amount of time. The validity of tattoo addiction seems like it would be an easy question to answer. If you turn on the television, you can typically find several reality shows featuring people covered from head to toe in tattoos. There are even shows solely focused on tattoos like Miami Ink, Ink Master, Tattoos After Dark; the list goes on and on.

Most people know at least one person that is partially covered, if not fully covered, in tattoos. Tattooing is a billion-dollar industry, and according to the Pew Research Center, about 40% of the Generation X population have one tattoo, and in research from Brain Statistics, 32% of people stated they were addicted to tattoos. But is it a clinical addiction? The answer to that isn't an easy one. 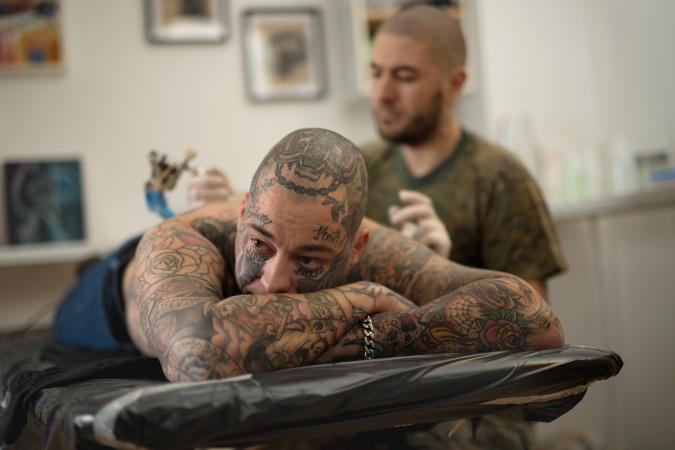 One of the greatest debates on whether tattoo addiction is real is the term itself. According to the American Society of Addiction Medicine, addiction is a dysfunction in the circuitry of the brain that causes a person to pursue a particular action or substance because of the reward or relief brought by the particular substance or behavior.

However, it needs to be clarified that this goes beyond the occasional wanting of the behavior to a need or craving to do the behavior. This need would also impact the person in a way that would cause significant problems within their life and relationships.

This is where determining if tattoo addiction is real becomes tricky. Because there are several reasons that a person could get their body tattooed, it comes down to the question: is it just a passion or addiction? While this is a fairly unexplored area of addiction (which contributes to the problem), you can look at the different motivations behind tattoos to see if there is a possibility that you, or someone you know, might need help.

Tattoos have been around for a long time. Some of the earliest examples of tattoos were about 2000 B.C. in Egypt. Similar to their use today, tattoos have been used by people as a way to decorate their body and build their self-esteem or beauty.

Most tattoos are not a rash decision. They are something that patrons think about for days, weeks, and even years before placing them on their body. Additionally, a psychologist from the Anglia Ruskin University, who has done extensive research on tattoos, Viren Swami, points out that people seem to consider their choices carefully when considering a second tattoo, stating that it takes some between two and seven years to make the choice. Pain, permanence, and affordability are definite factors when getting tattoos, according to Swami.

Another aspect of the motivation behind tattoos is healing or therapy. Think about the reality show Ink Shrinks. Here tattoos are used to help people find closure or heal. Often tattoos created by tattoo artists are in remembrance of a loved one or to cover up a scar.

Sometimes, people just get tattoos that will motivate or inspire them to move forward. There's nothing better than a big motivational reminder that 'you've got this'. It will never leave, never let you down, and it's always there to tell you, you can do it.

While it's no secret that tattoos hurt, there is also no denying that getting a tattoo is a rush. The moment the needle hits your skin and sometimes even before, you have a rush of adrenaline that courses through you. However, what exactly is the rush?

As a response to the pain, your body releases endorphins into the bloodstream to relieve the pain. As these endorphins bind to the opiate receptors, you feel the 'high'. The high is similar to those that you get from exercise, sex, or even drugs. You feel euphoric. This is where some experts state that addiction may come into play.

The need for this 'high' could suggest that there is a neurophysiological force at play rather than a conscious choice, according to Kirby Farrell, Ph.D. Meaning, your brain needs the tattoo to get the high, it's not just something that you want. In this case, getting that new must have tattoo could be crossing over into addiction, and treatment might be an option.

Additionally, tattoos were labeled by the American Academy of Child and Adolescent Psychiatry as a form of potential self-harm. In addition to the rush, someone might find the blood or pain associated with tattoos soothing. They might use tattoos as a way to sooth themselves or feel in control. In this case, treatment might be necessary to understand the underlying cause.

Is tattoo addiction real? The short answer is maybe. Like anything else, tattoos can become an addiction. However, there really isn't enough research into tattoos and their addictive qualities to state that tattoo addiction is a real, clinical disorder. In truth, it all boils down to why you get inked.