Even modern day warriors need their war paint, and this is no different for the U.S. Marine Corps. Among USMC tattoos, there are several iconic options available with a long-standing military heritage. However, before you etch that USMC emblem into your arm, you might want to check out the very real military restrictions for these patriotic tattoos.

In the 18th century, tattoos were prevalent among sailors in Britain and America as a form of identification. This tradition of tattooing was introduced to the U.S. Marine Corps through the navy in about the 1900s, according to Staff Sargent Stephanie van Geete.

Since that time, tattoos have become a common occurrence etched on marine's skin. These designs become a part of their identity and a symbol of their commitment to our country or a reminder of their past. While designs may vary depending on the individual, their rank or their unit, there are several common designs that are prevalent within the marines.

According to Wilfrid Dyson in his 1925 book The History of Tattooing, in the early days, marines would mark themselves with a flag or bullets, while naval men used an anchor or a ship. However, today there are an array of patriotic images that are prevalent in the U.S. Marine Corps. Here are a few of the most common ones and their meaning.

During World War I, the Germans nicknamed the U.S. Marines devil dogs, leading to their bull dog mascot. Common placement for this tattoo is on the bicep or forearm. 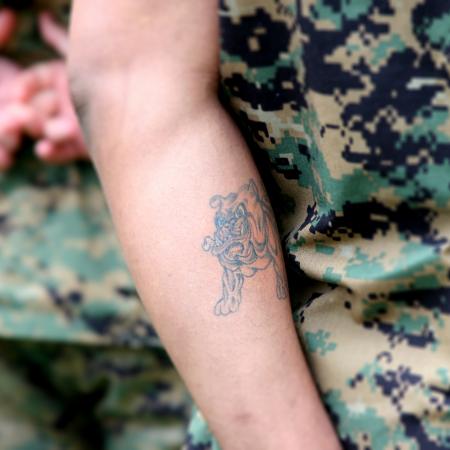 The initials for the United States Marine Corps are a common tattoo among marines. You will typically find these tattoos on the forearms, legs, chest, down the rib cage or within larger pieces, although they can be in more unique places, such as the hand. 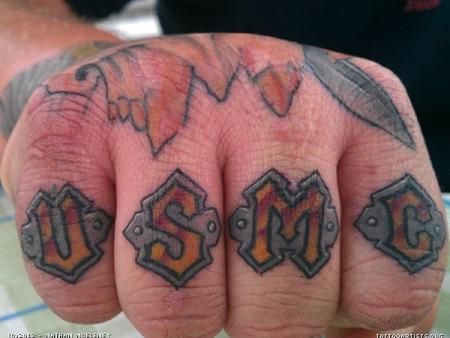 This is the emblem of the U.S. Marine Corps. The eagle is the symbol of the United States of America, and the globe shows their presence in every nation and the anchor shows their ability to access all coastlines, as well as the naval history. These tattoos are common as back and chest pieces as well as along the biceps or calf. 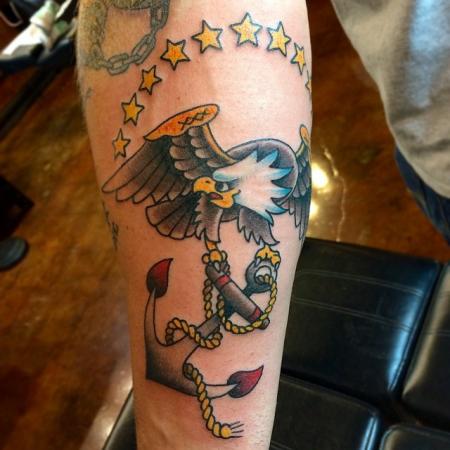 Eagle and anchor by Martin Hatton

The motto of the Marine Corps, Semper Fidelis, means always faithful in Latin. Placement for this tattoo is pretty much limitless, but you will commonly see it along the chest and back.

The American flag is an iconic symbol of America and is typically coupled with an eagle. This tattoo is used to show pride in their country. The location for this tattoo is limitless. It works as a small piece as well as incorporated into other images and wording. 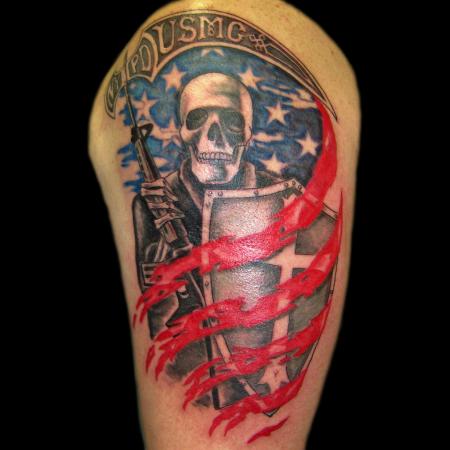 Typically, 'Death Before Dishonor' is written on a scroll around a dagger, this is a popular tattoo symbolizing their commitment to their country. Given the size of this tattoo, it might be placed on the calf, forearm or the bicep, but it can be worked into larger chest and back pieces as well. 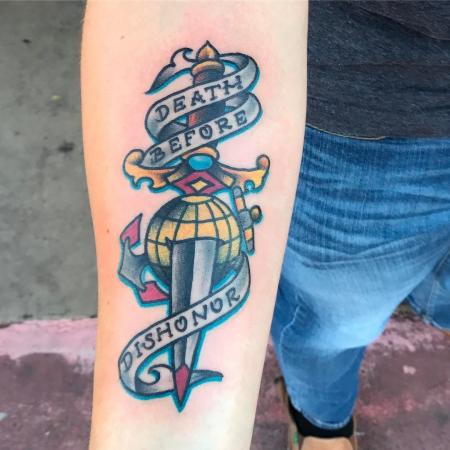 Death Before Dishonor by VanillaGorillaTattoos

Other key elements among military tattoos may include skulls, dog tags and tributes to fallen comrades.

While the designs can vary based on your personal preference, the placement of tattoos for those active in the military is very strict. The head, neck, hands, elbows and knees are off limits for tattoos for the most part. Below, we will explore these areas in more depth.

The U.S. Marine Corps does not allow any tattoos above the collar of a crew-neck shirt.

Tattoos on the hands are restricted except for a 3/8-inch single tattoo on one finger (typically a wedding band tattoo).

All tattoos covering the upper legs and lower legs must stop two inches above and below the knee.

Tattoos on the lower leg are permitted, but they must not be bigger than the individual would be able to cover with their hand.

USMC tattoos aren't just for marines. Civilians can choose to get a tattoo to honor a marine or out of a sign of respect. Typically, civilians getting iconic USMC tattoos are accepted, as long as it is respectful. The sacrifice and dedication of a marine is typically something revered, and you will see family and friends get tattoos out of respect for their service. Additionally, civilians may get a USMC tattoo in remembrance of a friend, family member or loved one. Spouses may get a USMC tattoo to celebrate and pay tribute to their husband or wife.

Marines have created iconic tattoos with a long-standing heritage and tradition that commands respect and honor. There are multiple designs but a few that are inherently linked to the history of the U.S. Marine Corps. If you are serving, placement could be limited, but there are definitely options for you to decorate your body like the warrior you are.

A USMC tattoo is very meaningful. Whether you belong to the marines or are supporting a loved one who served the country, this is certainly a type of tattoo that has deep meaning. Choose the right tattoo, in accordance with the latest guidelines if you are in active service, and you can proudly show your support in a unique way.