Tattoos and the Navy seem to go together like bread and butter. Among U.S. sailors, tattoos actually started emerging as a form of identification during the 18th century. This tradition of body modification has continued into the present day across all branches including elite military units like the U.S. Navy Seals.

Navy Seals are special ops soldiers that are specialized in sea, air, and land training. Just like all branches of the military, these elite forces have tattoos that symbolize their commitment and service. However, before you can even get into the designs for Navy Seals tattoos, it is important to understand the tattoo regulations in the Navy. As far as the U.S. Military goes, the Navy has some of the most lenient regulations.

As of March 2016, tattoos including full sleeves are acceptable. According to the Navy, only the head, face and scalp are off limits. The neck and behind the ear may have one tat but it should be restricted to one inch. Additionally, tattoos on the torso should not be visible through the white uniform shirt.

For the rest of the body, there is no restriction on size and placement. This means that full sleeves on the arms and legs and even tattoos on the hands are acceptable. According to the Navy Times, these new more lenient restrictions on tattoos are supposed to help open opportunities to new recruits with body modification.

Like all areas of the military, Seals and all naval personnel have a standard to uphold. Therefore, the tattoos on their bodies must not be images that would bring discredit to the Navy. This means that any prejudiced or obscene tattoos are restricted. Tattoos that discriminate against women, men, race, or religion are also not permitted. The Navy also rejects individuals with tattoos that affiliate with gangs or extremist groups as well as those that are sexually explicit. If you have a tattoo that advocates drugs or drug use, these will not be acceptable either.

Tattoos Specific to the Navy Seals

Several branches of the U.S. Military have tattoos that identify them and bring them together as a unit. This is even more true in special ops units like the Rangers and Seals.

A common tattoo that you will find on both current Seals and those retired from the Navy is the Seal Trident. This symbol recognizes Navy Seals and designates them as completing their training. The design is unique in its creation since it not only represents the Navy (anchor) but all the areas of the Seals protect, including air (eagle), land (pistol) and trident (water).

These elements also hold secondary meanings as well. For instance, the placement of the eagle's head demonstrates its humility, while the cocked pistol shows how they must be ready at all times. The trident symbolizes the Seals' connection with the ocean - one of the most brutal terrains to fight on. This vast element commanded by the likes of Poseidon and Neptune must be mastered by the Seals.

The Only Easy Day was Yesterday Tattoo

This is a motto of the Navy Seals that has roots in their tough training program. The BUD/S, Basic Underwater Demolition/SEAL Training program is a 30-week training program that is considered by many to be one of the toughest in the world. This motto shows how the training and work of these elite warriors will only get harder and tougher, but they choose to soldier through. 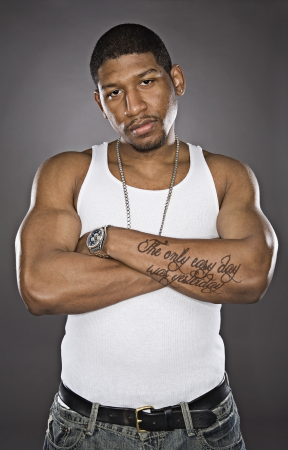 Another design distinct to the Navy Seals is the frogman, which is a known nickname. This is because they are trained in underwater tactical missions and scuba diving. You might find these images done as frogs wearing scuba gear or as a frog-like humanoid form. There are different variations that the frogman tattoo can take.

Whether you are celebrating a comrade-in-arms or you want to commemorate a family member, there are a few tattoos that you will see on Navy Seals and their family members or friends. These tats are used to celebrate these top soldiers.

One of the most common tats to honor a fallen Seal is the bone frog. Finding its roots in the nickname frogmen, this tattoo signifies a soldier lost in the line of duty. You might see this tattoo crawling up the Seals shoulder or on the arm. It might also have a date or just be the bone frog insignia. While this is typically a tattoo seen on soldiers, civilians honoring a fallen soldier may also get this tat as well. You might see this type of tattoo with the person's name and their birth and death date. Other elements like a cross or dog tags might be added as well. 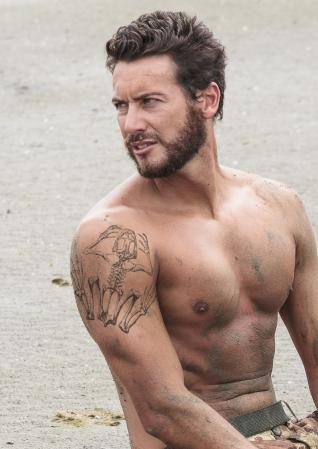 Another way to honor a Seal in a memorial tattoo is with an anchor and ocean design. These fighters are experts of the sea, air, and land, but they find their roots in the Navy. The loss of the soldier can be seen through the lost anchor washing away in the sea. These can take on different forms depending on the preference of the person getting the tattoo. In the design below, the name of the soldier also flows on the waves, with a Navy Insignia standing proudly among the ocean. 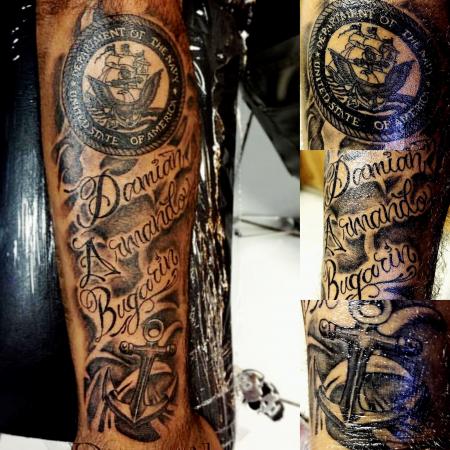 Toughest of the Tough

While the Navy is lifting several regulations on tattoos that allow recruits to have full sleeves and hand tattoos, the face and head are still off limit for the most part. Within these diversely inked bodies of the Navy, you will find tattoos specific to the special-ops force the Seals. Among these seasoned professionals are different tattoo designs that are recognized as Seals tattoos. These include the Seal trident, frogman, and bone frog tattoo. While these tats are designed mostly for soldiers, you can see them on their friends and family as well to commemorate a fallen loved one.