While fairy tattoos are among the most popular tattoo images today, pixie tattoos can be even more appealing to some. If you love a sense of uniqueness, difference from others, or feel you embody any of the pixie's traits, a pixie tattoo may be the one for you.

Pixies are mythological creatures known for causing mischief and playing pranks. While they are sometimes interchanged with fairies, pixies are unique creatures with a different appearance. They typically have pointy ears, slanted eyes and are outfitted in a pointy hat, but many variations are possible. Pixies can be depicted many different ways in tattoos.

Do you have a favorite story book, mythological book or other source of pixie art? Have one of the images adapted into a tattoo. Place the pixie alone, or for a more realistic affect, depict a few other items in a scene, such as flowers, trees or animals.

If you create a story book image, make sure you give it room to spread and develop as needed. For this, you may want to consider a larger area for placement, such as the back, hip or maybe a sleeve. 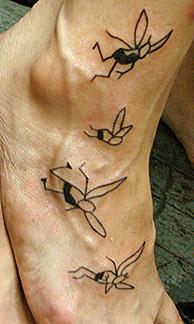 The pixie is meant to be a mischief-maker, so why not have a little fun with your tattoo? Turn the body of the pixie away from the viewer, but have the head facing outwards. Your pixie can be winking or placing a finger to her lips to signal that she is about to get up to mischief and is sharing the secret with someone who watches.

It only makes sense to place a mischevious pixie where she can be seen by viewers. Behind your ear, on your neck or on your wrist may be ideal places.

Pixies are sometimes described as both grotesque and hard-to-see. Why not combine these two traits into one tattoo? Use an exaggerated line drawing for the tattoo with no fill or shading. The end result should be more of a pencil sketch or study that draws the eye simply because it is more difficult to see. To complete the look, use blue ink rather than black to suggest the pixie's skin color.

Pixies are frequently depicted in forests and trees. Combine the image of a pixie a tree for a tattoo that holds the viewer's eye. Hide the pixie in the lines of the trunk of the tree or within the foliage, blending her clothing in with the leaves. Once the viewer picks her out, she'll never be hidden again.

Give your woodland pixie some room to play by placing this tattoo on a larger surface. The chest, upper arm or back would be ideal.

Rather than creating an image of a full body for your pixie tattoo, consider creating only the face. Put emphasis on the pointed ears, slanted eyes and give a slight blue cast to the skin. Add a garland of flowers or leaves in her hair and any facial expression that embodies the pixie for you - from mischief to joy.

A portrait can be large or small, which makes this a tattoo that can go anywhere. Try the upper arm, ankle, foot or chest.

Pixies are small creatures, so place something else in the tattoo with them that will give a sense of scale. Flowers that stand just taller than the pixie or which hold the pixie on their petals can be a great way of showing the scale of the design.

You can place a small pixie on a less visible area of your anatomy to be discovered at random, such as behind the ear or on the pelvic bone.

If you want to showcase your astrological sign while blending your love of fairies, why not combine both styles? An Aries star sign may choose a pixie who possess some of the ram tendencies, such as a pair of cute horns atop her little head, while a Cancer sign may find herself under the sea with a pair of crab claws. Combining your birth sign with a cute pixie tattoo can be a unique and sentimental choice. 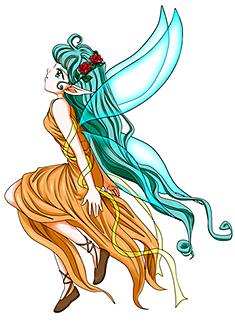 Place an astrological pixie someplace where you can always see it. Your wrist, arm or foot would be ideal.

If you love character pixies, you can opt for charming designs like Tinkerbell or Herself the Elf (a retro favorite). Flaunt your love for your favorite pixie-like animated character and embrace her minute stature.

Character pixies were meant to be shared and shown off. Wear one someplace visible like the arms, wrists, neck or leg.

For a unique spin on your birth sign, why not opt for a flower pixie depicting your birth month instead? Simply find out your birth month flower, and have your pixie adorned in the colors and pattern of the petals. She can either sit perched on the flower itself, or be nestled amongst a field of blossoms.

Flower pixies are a whimsical spin on a traditional flower tattoo and can be worn in a variety of placements, including on the inner wrists, the back, lower back and shoulder.

If you'd rather opt for a celestial designed piece, consider a moon star pixie tattoo. A mystical pixie tattoo offers plenty of inspiration. The back offers plenty of mural space should you decide on an otherworldly celestial tattoo. Down the road, you can add stars, planets and even constellations for a unique and stellar piece. Add some magic to your pixie with a wand and you're ready to enchant.

Leave lots of room for a celestial design to grow over time. The back, an arm for a sleeve or the chest would be ideal placement areas.

If your heart is at sea, you can go the magical route by incorporating water pixies into your body art design. Show them off alone, or with some sea images like shells, rocks or water.

A water pixie design can be simple or complicated; adjust your placement to suit. Small, simple designs can go on a shoulder, wrist or ankle, while larger designs may be placed on the upper back, chest or hip.

Pixies are sometimes shown in the company of others, so why not have a number of them, instead of only one? Create a cluster of tiny pixies across the upper back and shoulders or down the upper arm. They can be causing mischief, or just having some fun as they go.

Pixies can also be added to other designs. Try place a pixie in the middle of a tattoo wristband or anklet as the final, decorative touch

While modern use of the word pixie frequently makes the word interchangeable with "fairy", pixies and pixie tattoos have a meaning all their own.

Pixies of ancient legend were often shown as mischief makers, luring children into the forest, or playing practical jokes. A pixie tattoo can be said to show off the wearer's playful side, or to display a sense of mischief and humor.

Pixies are thought to be harmless to humans and particularly helpful to those in need. Use a pixie tattoo to display a thoughtful or helpful nature.

Pixies are thought to be great explorers who frequently hid themselves in horses' manes to explore or travel great distances. Pixie tattoos can be an excellent way of showing an exploratory nature.

Pixie dust and pixie magic are frequently mentioned in texts of pixie lore. If you have a love of magic and the natural magic in the world, a pixie tattoo may suit you well.

Pixies gradually faded away from popular lore, becoming synonymous with fairies and elves. The true pixie's allure lays shrouded in mystery. Getting a tattoo of this mystical being could indicate a mysterious or hidden side.

Bring Your Pixie to Life

The image of the pixie is old, adaptable and subtly unique. Incorporate this playful image into your next tattoo and embrace everything the pixie brings to you.