You rock a barber chair and you feather a mean bang. So, when you're shopping for great tattoo ideas, what could be more appropriate than a comb and scissors? It's a cool graphic that adapts to any placement and signals that you are a hairdresser to your core.

A scissor tattoo can indicate decisive sharpness - or a willingness to cut ties, cut loose, and cut out. Scissors are essential tools of seamstresses, barbers, fashion and costume designers, and needlepoint hobbyists. Add a comb and you're practically in the salon.

In fact, sporting a scissors and comb tattoo in a haircutting salon advertises that you take yourself and your skill seriously. Keep it spare and utilitarian or tart it up with color or historical design. This is one tat that grabs attention and inspires conversations.

The blade edge of the scissors might signify a momentous change or a daring personality. The comb creates order out of chaos, straightening and grooming a tangled mess. Together, scissors and combs are a contemporary yin yang design that works, small or large, wherever you ink it. 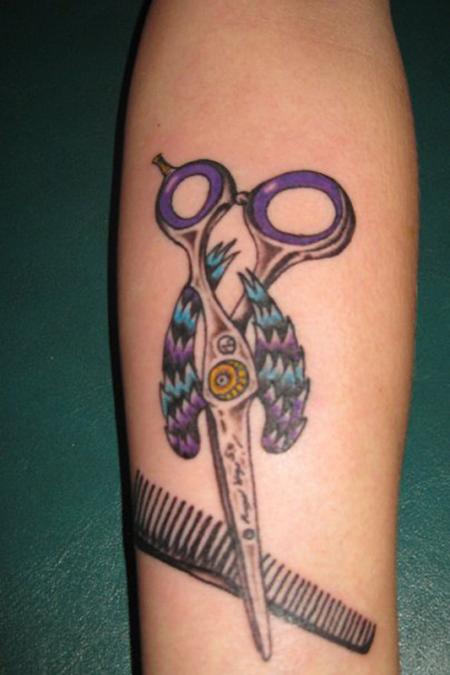 Be a Sharp Shopper

Scissors and combs are illustrations that really need a fine artist to translate the forms to crisp images on your skin. Look at the work of art school graduates, and tat artists who are known for verisimilitude and drawing expertise. Be prepared to spend a little more to book a session (or two) with a proven illustrator who delivers stunning realism or elaborate fantasy illustrations. The image can be part of an intricate "life-story" full sleeve, shoulder, or full back. It can adapt to the top of the foot or nestle into an ankle. A crisscross comb and scissors tattoo is sexy and subtle at the hairline, just behind the ear, where it can also indicate when a visit to your favorite hairdresser is overdue. 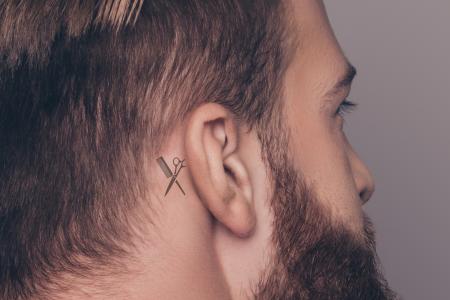 Beauty and Your Brand

Whether you work in the aspirational world of fashion and style-setting, are proudly obsessed with perfect grooming, or just love the look, a scissors and comb tat isn't your average hearts-and-flowers ink. It's really a shortcut to advertise your personal brand. The tattoo design is an ingenious showstopper and an opening. Be prepared to explain your skin art to the charmed and curious - or just pause for one tantalizing moment at the questions, smile mysteriously, and carry on. You get major points for imagination and intrigue, and you already have an extremely cool and custom tattoo - win-win.