A St. Jude tattoo will cost you some real estate. The symbolism attached to this keeper-of-the-flame disciple is a feature of the tat and clear, visible detail requires some skin. St. Jude is often an emotional choice for a tattoo, acquired in the face of a serious life crisis. It can be the mark of the survivor.

Jude is the traditional patron saint of hopeless cases, today recast as the bringer of hope and repairer of lost causes. His mission, in the earliest days of Christianity, was spreading the message of hope in the gospels of his teacher, Jesus Christ. He is portrayed holding an image of Christ's face, or a reliquary containing the image of Christ, next to his heart.

Most St. Jude tattoos are black and white (gray-scale) illustrations, occasionally with a flame over the head symbolizing the presence at the Pentecost, the moment when the Holy Spirit descended on the Apostles after the Resurrection of Christ, imbuing them with the courage and grace to face down great difficulties and hold to a strong faith. 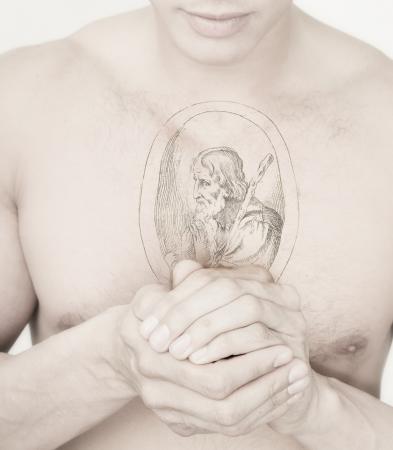 St. Jude is a recognizable traditional saint with robes, long hair and a benevolent demeanor. To distinguish him from a Christ-figure and from other Apostles, typically his right hand holds a detailed Christ portrait or medallion and his left hand a large staff. It's hard to show that level of detail in a tiny tat. If you are planning a St. Jude tat, expect some serious ink. 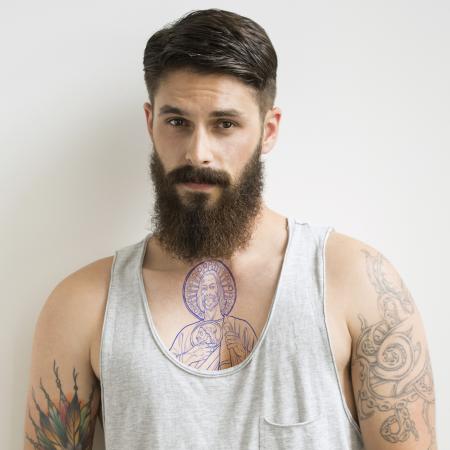 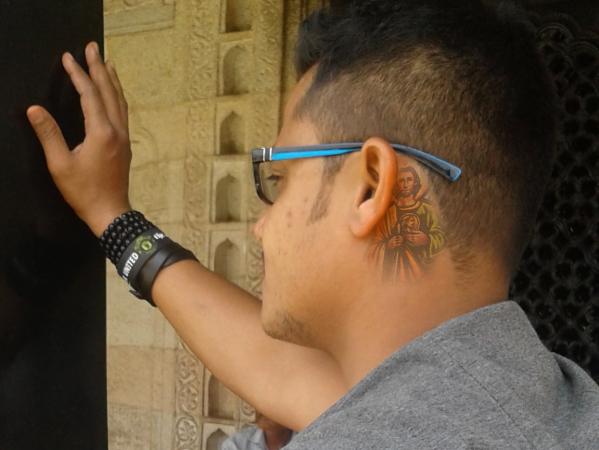 The St. Jude Runs are relay and individual fundraising events for St. Jude Children's Research Hospital. Runners from Memphis to Peoria participate in a relay. Other sites include Champagne-Urbana, Chicago, Decatur, Springfield, St. Louis and more. To celebrate their participation and draw even more attention to the cause, some runners get an official race logo (large black running shoe prints alongside smaller running bare feet in red) tattooed around their ankle or up a calf.

Some runners opt for a photo-image of a loved one treated at St. Jude as part of their tattoo. Others get a new logo tat every time they run the fundraising race. The tattoos signify membership in a club founded on personal crisis but fortified with the hope for cures and a future for young people diagnosed with a life-threatening disease.

St. Jude Thaddeus (not to be confused with Judas Iscariot, the betrayer of Christ) was a cousin of Jesus and one of the original twelve Apostles. He came into his own after the crucifixion, an itinerant traveler preaching the gospel of Christ and expanding the early church at great personal risk.

Jude is always depicted with an image of the head of Christ in his arms and a staff or walking stick. His known miracle was the curing of the King of Edessa of leprosy. Jesus sent Jude to the king with a cloth on which he'd left an impression of his face. When Jude delivered the cloth, the king's leprosy vanished. Jude was eventually tortured and killed for his faith. His remains are entombed with the other martyrs in a crypt under St. Peter's Basilica in Rome.

Your St. Jude tattoo is a declaration that you meet life's setbacks with courage, optimism, and the faith that a powerful saint has your back. Whether that saint is on your back, or somewhere else on your skin, seeing the tattoo is a reminder of the mysteries and marvels of faith and the understanding that you expect your actions and choices - your insistence on hope - to affect your outcomes.