For those considering getting inked for the first time as well as those with a variety of tattoos, tattoo symbolism often plays a role in design choice as well as placement. LoveToKnow recently had the opportunity to sit down with tattoo artist Amanda Pate to talk about tattoo symbolism, as well as the influence tattoo placement adds to the meaning.

Amanda Pate has been a tattoo artist for five years and is currently attaining a degree for graphic design at Full Sail University out of Florida. She has been involved in art since about age ten, and has always been interested in the art and history of tattoos. Artists who inspire her include Joe Capobianco, Kat Von D, Jason Wilson and Corey Smith.

LoveToKnow (LTK): How did you get started as a tattoo artist?

Amanda Pate (AP): I started out drawing on people in high school with sharpies for lunch money, but I really got interested in tattoos when I lived in Mississippi. I got my chest peace done while I lived there and became friends with the artist who started to teach me the art. 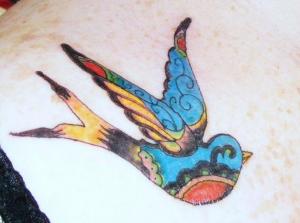 LTK: What role do you think tattoo symbolism plays in tattoo choice?

AP: I believe getting a tattoo is a very personal and symbolic process; if you research the history of tattoos you'll see that tribes often used tattoos as identifying their class system. Whether it's a small tattoo or one a person decides to get in the spur of the moment, it goes beyond what the piece may mean and the tattoo becomes a symbol of that moment. Sailors used to get stars to mark all the places they have been. I do believe you should put thought into a tattoo, though.

LTK: Does placement influence the meaning of a tattoo?

In our current culture, as bad as it sounds, gang tattoos are a prime example of tattoo placement and influence. For example, the symbol of the tear drop under the eye is a symbol for murder, serving time or for a lost loved one. The spider web under the arm or on the elbow stands for time served or struggle. Skulls represent death, etc. As a matter of fact, in some cultures they use tattoos to identify prisoners rather than just giving them a number to wear on their clothes.

LTK: Many cultures use tattoos to symbolize their faith or religion. Do Christian tattoos reflect the same kind of tattoo symbolism?

AP: There is a big controversy about Christian tattoos. Some people say getting a tattoo is getting the mark of the beast, but in the world of tattoos the mark of the beast is 666 and various other signs like devils, etc. There is a lot of confusion on the Scripture regarding tattoos. Personally, I believe getting a tattoo based on faith is an excellent way to show you have belief. Also, it can be used as a tool for testimony. In my opinion, faith-based tattoos are some of the more beautiful tattoos.

LTK: Tribal tattoos are popular today. Does placement of the same tattoo on different areas of the body change the meaning?

AP: I don't believe so, but if you are trying to make a statement, the placement can be of some importance. For example, for tattoos which are written in Kanji, placement can be a big part of where you would get a tattoo for that purpose.

LTK: Are there tattoos attributed with mythological symbolism?

AP: Oh yes, especially with Japanese tattoos. The Koi fish for example represents achievement or good fortune. The Cherry Blossom in Japan represent the process of life based on Buddhist beliefs and in China it represents power, beauty and female dominance. The dragon represents courage, power, strength, wisdom and protection. These types of tattoos have been around for centuries and in some places they use the same technique that was used then. 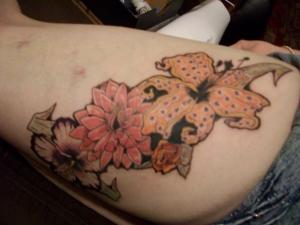 LTK: Thanks for talking with us. Do you have any special insights you'd like to share with our readers?

AP: I have a favorite quote; I don't know where it comes from. "Your body is a temple. Some people just decided to wallpaper it."

The question I am asked the most is, "Do they hurt?" That is a definite yes. Some people can handle pain better than others, and some people take it as a euphoric experience.